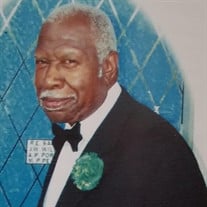 Giving Honor to the father, the son and the holy ghost was the theme of a mighty great and gentle man Adam Alonzo Rhinehart, Jr. Mr. Adam Alonzo Rhinehart, Jr. affectionately known to many as “Lonnie” was born September 2, 1932, in Saluda, South Carolina. He was born the beloved son of the late Adam Alonzo Rhinehart, Sr. and Charlotte Rolland Rhinehart. He was the fourteenth child of fifteen. At an early age Adam was introduced to Jesus Christ and he accepted Him as his savior and was a Steadfast Soldier for the Lord his entire life. Adam became a lifelong active member of Pine Pleasant CME Church in Saluda, South Carolina, where he served as a Trustee, a member of the Usher Board Choir and countless other positions. He also became a member of Zion Canaan Baptist Church in Columbia, South Carolina. While attending Zion Canaan Baptist Church, Adam was active with the Brotherhood, Male Chorus, Jubilee Choir, Deacon Board, Trustee Board, Sunday School and a Prayer Warrior for many. He was educated in the Saluda County school system where he lettered in high school basketball and became one of the first bus drivers. He was a great driver receiving bonuses each year except one year when a farmer made a claim that he ran over one of his chickens. Adam was huge proponent of education and voting. He never missed an opportunity to encourage and assist others with their education and making sure all he met were registered voters. Adam met the love of his life, the former Eve Dinkins, a pretty young lady with the long black ponytail and they married on March 31, 1961. The union was blessed with two children: Tony and Tami, of whom Adam was especially proud, and they honored and adored him. He was passionate about being a great provider, praying and planting. Adam was blessed with a green thumb planting was his passion, anything he touch grew. He was a dedicated worker at the State of South Carolina for 34 years and he ran his own landscaping business for close to 50 years. Since he personally knew the wonders of the Lord, he never missed an opportunity to introduce people to the gospel. Adam was a prayer warrior and a major giver; if knew he could do something for someone he would say “count me in” never thinking twice. Adam transitioned early Sunday morning, December 13, 2020, at home with his beloved family after giving honor to God by doing his daily devotional reading of his favorite scriptures and singing some of his favorite songs. He peacefully slipped away into eternal rest doing what he loved and “that’s the end of the story” one of his many sayings. Those left to celebrate his life and cherish precious memories are his wife of 59 years, Eve (Eva) Dinkins Rhinehart; son Tony (Lynn) Rhinehart of Irmo, South Carolina; daughter Tami (Vincent) Northington of Northeast Columbia, South Carolina; five grandchildren: Brian, Tonisha, Micha'-el, LeAnna and Gabrielle, all of whom he loved and adored; his four siblings: Ida McGraw of Saluda, South Carolina, Bennie Ruth (Johnny) Harp of Columbia, South Carolina, Lillie Thelma Rauch of Reading, Pennsylvania, and Dorothy Patterson of Columbia South Carolina; brothers- and sisters-in-love: Gregory and Doris Lindsey, Ernest and Myrtle Dinkins, Hilda Beard Dinkins, Jerome Dinkins, all of Columbia South Carolina, and Lewis and Jacqueline Dinkins of Elgin, South Carolina; a host of very special nephews and nieces family friends he held near and dear to his heart. Although Adam has left the physical body his spirit shall live in many of us forever. The family will have a special event in the future for the late Mr. Adam Alonzo Rhinehart, Jr. so the story isn’t quite over.

The family of Deacon Adam A. "Lonnie" Rhinehart, Jr. created this Life Tributes page to make it easy to share your memories.

Giving Honor to the father, the son and the holy ghost was the...

Send flowers to the Rhinehart, family.