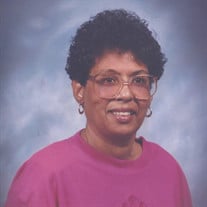 Early Wednesday, February 19, 2020, the Lord called another soul from earthly labor to heavenly reward. Adell Thompson Adams quietly left this earth at her residence in Columbia. Born July 29, 1941, in Columbia, South Carolina and was the fourth of five children born to the late Roy Walker Thompson and Nettie Holliday Thompson. A 1956 graduate of Harbison Junior College, she spent a gap year in New York before entering Benedict College in Columbia. She earned a Bachelor's of Arts degree in Music Education with Magna Cum Laude standing in 1962. While at Benedict, she met the love of her life, Benjamin E Adams. To this loving union, two children were born: Benjamin, Jr. and Adrian. Thirty-four years of marital bliss ended on July 5, 1995, with his death. In the early 1970s, Adell became a community activist in numerous organizations including: Greenview Neighborhood Club; Congaree Girl Scout Troop; SC Teachers' Association; Richland Educators' Association, where she served as president; SC Educators' Association, where she also served as president) and the Columbia Chapter of the NAACP, where she and her late husband were members of the State Board Conference. Additionally, she served as Chair of the Richland County Election Commisions until 2019 and was instrumental in creating single member districts for Richland County Council, making it possible for African-Americans to be elected to the Council. For all her many accomplishments, she has had numerous highway recognitions including Interchange #555 at I-20 named the Adell T. Adams Interchange. In addition to her parents and her husband, she was preceded in death by two brothers: Roy Walker Thompson, Jr. and Fred Albert Thompson; a sister Shirley Thompson Mazzie. She leaves to cherish precious memories her two sons Benjamin E. (Karen) Adams, Jr. of Columbia and Adrian E. (Shawn) Adams of Marietta, Georgia; five grandchildren: Terrell, Adrian Jermaine, Ryan, Keosha, and Malcolm; seven great-grandchildren; one sister Katherine (Henry) Griffin of Columbia; a host of other relatives and friends.

Early Wednesday, February 19, 2020, the Lord called another soul from earthly labor to heavenly reward. Adell Thompson Adams quietly left this earth at her residence in Columbia. Born July 29, 1941, in Columbia, South Carolina and was the... View Obituary & Service Information

The family of Adell Thompson Adams created this Life Tributes page to make it easy to share your memories.

Send flowers to the Adams family.