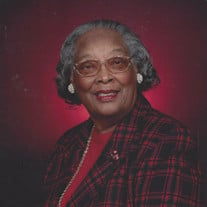 Adell Dean Wilson Watson, fondly known as “Dell,” was born to the late Walter and Helen Wilson on March 6, 1931 in Danville, Virginia. She entered into eternal rest on January 5, 2019 at Palmetto Health Baptist Hospital in Columbia, South Carolina. Adell became an active member of Prospect Baptist Church at an early age. She was a member of the church’s junior choir and served as a church school teacher. Dell grew up as an integral part of her community and church. She viewed herself as being a model, young Christian, exemplifying the finest traits of Christian Womanhood. It was always a joy for her to return to Prospect Baptist Church for worship and fellowship at the church where she first found Christ. Dell received her early education in the public schools of Danville and graduated from Southside High School in 1949, where she was crowned Homecoming Queen. Upon graduating high school, Dell received her Bachelor of Science in Home Economics Education from Saint Paul’s College where she was often referred to as “Black Beauty.” Carrying on the legacy, she was crowned Homecoming Queen once again during her time as a collegiate. On August 16, 1955 she married George William Watson, Sr., her forever love of 65 years. From this union, they were blessed with two children, Jill Anita Watson Asouzu, George William Watson, Jr., and “adopted son”, the late Jimmie Lee Gasden. Dell worked at Clemson Extension as a Home Economist for 13 years in Kershaw County. She also served as a public-school teacher in Charleston, Florence, and Orangeburg, South Carolina. Wherever her husband served as pastor, she was extremely supportive and found ways of ministering with him, taking on tasks such as directing youth choirs and serving as a Sunday School teacher. Dell was the first person of color to serve as president of the Southeastern Jurisdiction Ministers Wives and Widows Organization, and was an active member of the United Methodist Women organization. She retired in July of 1992 and devoted her time to helping to raise her grandchildren. She was a Diamond Life Member of the Orangeburg Alumnae Chapter of Delta Sigma Theta Sorority, Incorporated and enjoyed going out with the “Bridgadiers” to play bridge. Dell’s volunteerism was important to her. As a two-time Breast Cancer survivor, she served as an advocate and support system for those diagnosed in her local communities. Dell’s greatest joy was being a minister’s wife, a mother, a grandmother, and an educator. One of her greatest strengths was her ability to see the best in people, even at their worst, and not be reluctant to give a compliment. She was preceded in death by her older brother Walter Elgin “June” Wilson and her brothers-in-law: Leon Watson, Sr. and Samuel Watson. She leaves to cherish her memories her husband, George; her children: daughter Jill (Chris) Asouzu of Columbia, SC, and son George W. (Monique) Watson, Jr. of Spartanburg, South Carolina. She will be especially missed by her seven grandchildren, who affectionately referred to her as “Ma;” three great-grandchildren; four siblings: Mrs. Mary (George) Strader of Washington, DC, Dr. Rev. Samuel R. (Norma) Wilson of Forestville, MD, Dec. Valeria (Robert) Miller of Capitol Heights, MD, and Ms. Rita Strange of Temple Hill, MD; two sisters-in-law: Sheila (Fred) Danforth of New Ellenton, SC, and Ellen Watson of Washington, DC; and a host of nieces and nephews. As we reflect on her life, accomplishments, and lasting impact she had all of those who interacted with her, she will always be remembered as being the embodiment of a strong black woman. In lieu of flowers the Watson family has requested donations be made in Adell's memory to the Trinity United Methodist Church Restoration fund.

Adell Dean Wilson Watson, fondly known as &#8220;Dell,&#8221; was born to the late Walter and Helen Wilson on March 6, 1931 in Danville, Virginia. She entered into eternal rest on January 5, 2019 at Palmetto Health Baptist Hospital in Columbia,... View Obituary & Service Information

The family of Adell Dean Wilson Watson created this Life Tributes page to make it easy to share your memories.

Send flowers to the Watson family.