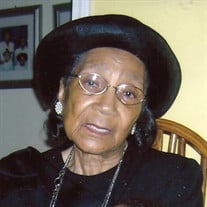 Aisla Celestine Timmons Barton departed this earthly life and entered into eternal rest on Tuesday, July 14, 2020, at her residence in Sumter, South Carolina. Born in Timmonsville, South Carolina and raised in Cartersville, South Carolina, she was the youngest of six children born to the late Henry Timmons and Ella Harrell Timmons. She was the beloved wife of the late Sylvandis R. Barton for sixty nine years. Mrs. Barton attended the public schools in Florence County. She also attended South Carolina State College in Orangeburg, South Carolina and later graduated from Morris College, Sumter. She was employed as a substitute teacher and later worked and retired from the former Campbell Soup Company, Sumter, in 1990, after twenty four years of service. Ms. Barton was raised in the church of New Haven United Methodist in Cartersville, SC. After marriage, as a Sumter residence, she attended Mt. Pisgah A.M.E. Church. Later, she joined Union Station AME Church; serving as President of Stewardess Board #2, for nine years. Mrs. Barton was characterized as a dependable and devoted servant and lovingly described as a beautiful Red Rose by a church member. She served with the Women’s Missionary Society, the Pastors Aide Committee, Sanctuary Choir member, Lay Organization and she was awarded the honor of being named “Mother of the Church.” In recent years, she was a prayer warrior; interceding with others for the needs of her fellow church members, family and friends. In her leisure time, she participated in the Campbell Soup Retiree Club and attended Sumter Senior Citizens Center. She enjoyed gardening, canning and cooking; specializing in her most notable sweet potato pies. In addition to her parents and her husband, Sylvandis, she was preceded in death by a sister, Marcell Hanna, and three brothers: Henry Timmons, Lewis Timmons, Aurin Crosby Timmons and several nephews and a niece. Those left to cherish precious memories are four children: Sylvia (Lonnie) DeShazor, Trotwood, Ohio, Ronald (Sarah) Barton, Columbia, South Carolina, Myra O. Barton, Sumter, South Carolina, Dr. Darryl (Karen) Barton of Wausaw, Wisconsin; 12 grandchildren, 27 great-grandchildren and 25 great-great grandchildren; a sister, Eleanor Allen, Cartersville, SC and a host of other relatives and friends.

The family of Aisla Celestine Barton created this Life Tributes page to make it easy to share your memories.

Send flowers to the Barton family.