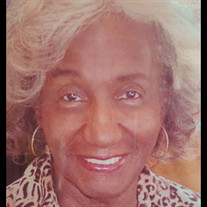 Aldonia King Hailey Sansom departed this earthly life to be with the Lord on Tuesday, April 19, 2016 at her residence in Irmo SC. Born on October 7, 1934 in Orangeburg, SC., she was the youngest of ten children born to the late Edward “Roc” and Phoebe Pauling King. Aldonia graduated from Wilkinson High School and attended South Carolina State College. Aldonia was truly a strong woman of God. She joined Union Chapel Baptist Church in Orangeburg, SC. as a child and was very active for many years serving on committees and the choir. She loved to sing! Most of us knew how she would throw her head back and hand in the air always bringing the spirit wherever she would sing. She was her pastor, Reverend John Bland’s, “Golden Girl.” In 2004, when the original Union Baptist Church was destroyed by a tornado, Aldonia kept the legacy alive by donating land where the church now stands. The initial Church was built by her father, father-in-law, Alfred Hailey, and Mr. Culclasure. In her later years, she became a member under watch care at Young’s Chapel Baptist Church, Columbia S.C. where she served faithfully on the Missionary Board, Jubilee and Mass Choirs. Aldonia was one of the first African American women hired at the Women’s Department of Corrections (now Midlands Technical College – Harbison Campus). For many years, she was also employed as a counselor at the Department of Juvenile Justice until her retirement. In addition to her parents she was preceded in death by her husbands; Jasper Hailey (over 25 years) and Floyd Sansom(1984); and a son, Wayne Hailey. Aldonia leaves precious memories to all who knew her. The family mourns but knows she will be with our father in Heaven. Those who are left to cherish and continue her legacy include: A son, Alvin Hailey, Sr., two daughters, Jacqueline Williams and LaVonda (Calvin) Toatley, all of irmo; one sister, Annie Mae Ross of Jamaica, NY; eleven Grandchildren, thirteen great-grandchildren; a special niece, Carolyn Robinson; Three special friends, Robert Weeks, Louise White and her “road Buddy” Lizzie Harmon; and host of other relatives and friends. She had such a loving, welcoming spirit and a forgiving, caring heart. Her presence will be missed by all who were privileged to have known and loved her.

Aldonia King Hailey Sansom departed this earthly life to be with the Lord on Tuesday, April 19, 2016 at her residence in Irmo SC. Born on October 7, 1934 in Orangeburg, SC., she was the youngest of ten children born to the late Edward &#8220;Roc&#8221;... View Obituary & Service Information

The family of Aldonia K. Hailey Sansom created this Life Tributes page to make it easy to share your memories.

Aldonia King Hailey Sansom departed this earthly life to be with...

Send flowers to the Sansom family.