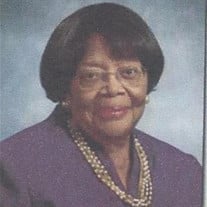 In the early afternoon of Wednesday, May 3, 2017, the Lord called home another angel as Dr. Alma Weaver Byrd entered into her heavenly reward. Born September 18, 1923, in Aiken, South Carolina to the late Frank Ernest Weaver and Annie Lou Spann Weaver who believed strongly in education, Dr. Byrd was always encouraged to do her absolute best in all her endeavors. A Life Member of the National Council of Negro Women (NCNW), Dr. Byrd has served as a member of the National Executive Committee setting a historical precedent by establishing the Benedict-Byrd Section of the NCNW, the first college section in the nation. She was also active in other organizations including: the National Association for the Advanced of Colored People (NAACP), the United Order of Tents, South Carolina Democratic Women, and the Baptist Gethesemane Association. Continuing the legacy of her parents' passion for education, Dr. Byrd served as a member of governmental advisory boards, task forces, and both regional and national education related groups. She served as a member, secretary/treasurer, and Chair of the Board of Commissioners for Richland County School District One. After eleven years of service in various capacities in the District, Dr. Byrd was recruited to serve as a state legislator. During her tenure in the South Carolina General Assembly, she was a member and Second Vice Chair of the House Education and Public Works Committee. Dr. Byrd sponsored bills that the established the SC Osteoporosis Prevention, Treatment, and Education Act, making South Carolina the seventeenth state in the nation to achieve this success. Additionally, she gave special assistance to the SC Gift of Life Fund related to organ and tissue donors. Dr. Byrd leaves to cherish precious memories two nieces: Zandra Marshall (Tommy) Pope and Florenia Marshall (Fred) Barton; three nephews: Lafayette Harrison, Alvin Harrison, and Dennis Harrison; a brother-in-law Eddie H. Byrd, Sr.; and a host of other nieces, nephews, godchildren, and other relatives and friends who will sorely miss her presence. In lieu of flowers, donations may be made to the St. John Baptist Church General Scholarship Fund in memory of Wallace and Alma Byrd. Services will be conducted by the Jackson-Brooks Funeral Home in Aiken (803) 649-4430

In the early afternoon of Wednesday, May 3, 2017, the Lord called home another angel as Dr. Alma Weaver Byrd entered into her heavenly reward. Born September 18, 1923, in Aiken, South Carolina to the late Frank Ernest Weaver and Annie Lou Spann... View Obituary & Service Information

The family of Dr. Alma Weaver Byrd created this Life Tributes page to make it easy to share your memories.

Send flowers to the Byrd family.