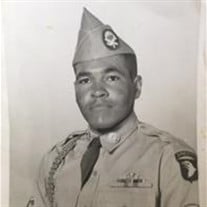 Alvin Adams was born May 14, 1932, in Ridgeway, South Carolina (Fairfield County) to the late Samuel and Lillie B. (Harrison) Adams. On June 10, 1953, he married the former Eunice Nelums. Alvin served in the United States Army in the 101st Airborne Unit during the Korean War and earned the Korean War Veteran's Medal. He also earned a Bachelor of Arts in art, painting, and sculpture from Benedict College in Columbia, South Carolina, and a Master of Arts in Humanities from Peabody College (now Vanderbilt University) in Nashville, Tennessee. Alvin spent his professional career as a teacher of art and history and as an assistant principal in South Carolina. Alvin had a strong faith and was a devoted member of Bethel A.M.E. Church in Bloomington, Indiana. There he served for many years as Sunday school superintendent as well as a member of both the Trustee and Steward Boards. Alvin also volunteered his time and resources in many other ways at the church and in the community. Alvin will always be remembered for his ability to make people laugh and for his incredible storytelling. In addition to his parents, Alvin was preceded in death by his children: Alvin Adams, Jr. and Dianne Adams Evans; and four brothers: Linder, John Quincy, Walter, and Dan Adams. He leaves to cherish precious memories his wife of sixty-three years Dr. Eunice Adams; his granddaughter Meredith Evans; two sisters: his twin Aileen Adams Edmunds and Louise Adams Belton; and a host of nieces, nephews, and loving friends. In lieu of flowers, the family requests that donations be made to the Lymphoma Research Foundation at 115 Broadway, Suite 1301 New York, New York 10006. Memorial Services will be held in Bloomington, Indiana, at a later date.

Alvin Adams was born May 14, 1932, in Ridgeway, South Carolina (Fairfield County) to the late Samuel and Lillie B. (Harrison) Adams. On June 10, 1953, he married the former Eunice Nelums. Alvin served in the United States Army in the 101st... View Obituary & Service Information

The family of Alvin Adams created this Life Tributes page to make it easy to share your memories.

Send flowers to the Adams family.