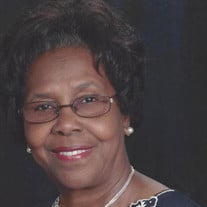 Mother Annie Lee Taylor Hamilton was born on June 30, 1934, in Hopkins, South Carolina. She was the daughter of the late Paul Taylor, Jr. and the late Emma Jenkins. Mrs. Hamilton attended Richland County, South Carolina public school system. She worked at F.W. Woolworth Company and was the manager of the “colored” diner on Main Street, Columbia, South Carolina. In 1967, Mother Hamilton was diagnosed with breast cancer and God miraculously healed her body. She proclaimed this miracle everywhere she went. After her first miracle, among many, Mother Hamilton went on to become a licensed cosmetologist where she graduated from Waverly School of Beauty Culture, Columbia, South Carolina. She also received a certificate from The University of South Carolina in the Methods of Teaching in the field of Cosmetology. Known as a Master Colorist, Mother Hamilton won numerous Hair Awards, served as a platform stylist and was an Examiner at the South Carolina State Board of Cosmetology. Mother Hamilton was an entrepreneur who owned and operated a salon for over 40 years; from which continues as New Life Hair Designs to operate under the ownership of her granddaughter. On a dare from a friend, Mother Hamilton enrolled in school and became a certified nurse assistant. She worked at Epworth Children’s Home and Eden Garden as a nurse manager. Her first patient was a breast cancer patient and she immediately fell in love with role care-taking. In 2003, Mother Hamilton officially retired but would still find her way back into the hair salon and continued to assist patients with care taking. She has sown into the lives of many individuals and as a result was known as all as “Mother Hamilton”. She indeed was a mother among mothers. She had hundreds of spiritual sons and daughters, from all over the world, whom she loved dearly. Mother Hamilton had a very unique way of making everyone feel special. She loved the Lord with everything in her. She was a mighty prayer warrior and prayed without ceasing. If she prayed for you, you could consider it done. When she asked God for anything, He always answered her request. A Wife, Mother, Grandmother, and Great-Grandmother, Mother Hamilton loved her family deeply. She was the matriarch and she led with grace, integrity, and a whole love of love. She lived her life as a great example for all to follow. She was a true Proverbs 31 virtuous woman and her children rose up daily and called her blessed. A longtime member of First Northeast Baptist Church, Mother Hamilton loved her church family with all of her heart. She served as a member of The Grateful Ones, Intercessory Prayer Group, and Mother of the Church. She called Pastor Masolwa and his wife her son and daughter. Mother Hamilton was married to J.C. Hamilton, Jr for 43 years. She loved her King and the two of them shared a common love for God, each other, their family and their church. As a loving husband, he took care of his queen first class style. She was preceded in death by: her parents, one brother, Lindberg Jenkins; son, Everette Charles Wright. Mother Annie Lee Taylor Hamilton leaves to cherish her most precious memories: her beloved husband, J.C. Hamilton, Jr; her two sons, Robert (Annie) Wright and Clifford (Mattie) Wright; one daughter, Angela (William) Patterson; one sister, Helen J. Williams; one brother-in-law, Sid Hamilton; two grandchildren raised in the home, Renee (Stanley) Davis and Reginald (Jacqueline) Wright; a special spiritual daughter, Glenda Wilder; ten grandchildren and twenty great-grandchildren; a hosts of nieces, nephews, cousins, friends, spiritual children, and a loving and supportive First Northeast Baptist Church Family, all of whom will miss her dearly.

The family of Annie Lee Hamilton created this Life Tributes page to make it easy to share your memories.

Send flowers to the Hamilton family.