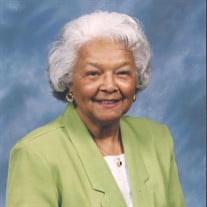 On Tuesday, March 3, 2020, the Lord send down His angels to bring home Arabella Goodwin Tate. Born October 28, 1926, in Columbia, South Carolina, Arabella, affectionately known as Arie, was the middle of six children and the last living child of the late Isadore Harry Goodwin, Sr. and Arabella Eunice Lewie Goodwin. A lifelong member of St. Luke's Episcopal, she was a 1943 graduate of Booker T. Washington High School and a graduate of Bennett College in Greensboro, North Carolina. She also did some graduate work at the University of Wisconsin, the University of South Carolina, South Carolina State College, and Midlands Technical College. For many years, she worked for the State Board for Technical and Comprehensive Education. She was married to John Wilhem Tate, who was the love of her life, and they were the co-owners of T&A Supply Center, which provided athletic equipment and supplies to many schools throughout the state. She also taught physical education at her alma mater Booker T. Washington and at Wilson High School in Florence, South Carolina. Arie enjoyed reading, tennis, swimming, and sewing. She put those talents as well as her skills as an educator to good use as a Girl Scout leader for several years. In addition to her parents and beloved husband, she was preceded in death by her five siblings: Isadore Harry Goodwin Jr., Harriet Liverman-Titus, Doris Hall, Eunice Hughes, and Patricia Jackson. She leaves to cherish precious memories her daughter Cheryl Tate Taylor of Irmo, South Carolina; two grandchildren: Brian Mitchell (Erika) Taylor of Columbia and Stacy Evelyn Taylor of Nashville, Tennessee; two great-grandchildren: Christopher Aaron Taylor and Brianna Marie Taylor; other relatives and friends. In lieu of flowers, donations may be made to St. Luke’s Episcopal Church 1300 Pine Street Columbia, South Carolina 29204. In the memo line, please add Capital Roof Improvement or Arabella Tate.

The family of Arabella Goodwin Tate created this Life Tributes page to make it easy to share your memories.

Send flowers to the Tate family.