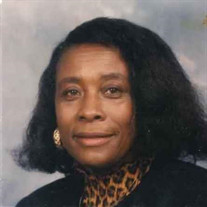 In Loving Memory of Barbara Toni Chandler Gadegbeku On January 20, 2016, Barbara Toni Chandler Gadegbeku,79, former resident of Kingstree, South Carolina, peacefully transitioned from this world. Barbara Toni Chandler Gadegbeku was born in Williamsburg County, the daughter of the late Dr. Samuel David Chandler (Kingstree or Salters, SC) and the late Mrs. Luvenia Williams Chandler (Cope, SC). She was educated in the public schools of Williamsburg County and graduated from Tomlinson High School 1956 in Kingstree, South Carolina. She received her Bachelor of Science degree in Biology and Chemistry from South Carolina State University. After graduating from South Carolina State University, she matriculated at Howard University, Washington, DC, pursuing a Master’s of Science degree in Vertebrate Zoology with a specialization in Embryology. It was there she met her husband of 53 years, Dr. Polycarp “Doc” Kwame Gadegbeku from Monrovia. The couple was married on February 15, 1958. They moved several times during their early years of marriage, living in Louvain, Belgium, Toledo, Ohio, and Monrovia, Liberia, West Africa before finally returning to the United States. They settled in Kingstree, SC. Though from a small family, her dream was to have many children. Together, she and Doc raised seven children - four girls and three boys. During those years of travel, Mrs. Gadegbeku, affectionately known as Ms. G, continued to pursue her education through study and research at the University of Louvain, Belgium. She became fluent in the French language, a gift she used in the corporate community of Baxter-Travenol Laboratories, Inc. as a translator of quality control letters and documents. She was also published academically in the field of Embryology, studying transplantation of ovaries in Drosophila. She worked tirelessly in the Kingstree community as an educator in the high school and technical college. She managed a daycare center for many years. Always an entrepreneur, she was the owner of several small businesses and managed real estate. She was active as a community activist and a political voice for the people, serving on numerous community boards and projects for the town and county. She was however happiest serving and advocating for the youth of her community. She enjoyed her many social and Masonic-affiliated circles of friends. She and Doc were known for their entertainment and travel with their friends and children. “Ms. G” was a phenomenal mother. She nurtured and instilled the love of God, education, books and music in all of her children. She had a melodious voice and an artistic hand with drawing and crafting. She was also instrumental in raising nieces, nephews and grandnieces in her home as they settled in the United States from West Africa. Her voice will continue to resonate in the hearts of her many family members, including children, grandchildren, nieces, nephews and cousins: Dr. Benetta Bell (Gary), Columbia, SC; Dr. Philippe Gadegbeku (Lesley), Duluth, GA; Dr. Linda Toomer (Eugene), Suwanee, GA; Mrs. Diane Evans (Kenneth), Conway, SC; Mrs. Irene Hodges (DeWayne), Debary, FL; Mr. Samuel Gadegbeku, Columbia, SC; Mr. Polycarp Gadegbeku, Jr., Florence, SC; and 14 grandchildren - Jonathan Micheal Agyei and Katherine Elizabeth Efua Bell; Zoe Camille Zakiya Gadegbeku; Benjamin Nathaniel Osakewe, Emily Claire Eshe and Carmen Elise Asha Toomer; Torrance Alexander Opora and Victoria Alexandria Mawusee Evans; Tiffany Layla, DeWayne Allen Coshi Jr. and Simone Afua Hodges; Samuel Nyamekya David Gadegbeku, Maxwell David Kojo Gadegbeku and Devan Chandler Oba Gadegbeku She was preceded in death by her sister, Anna Louise Chandler Griffin. She leaves to mourn her passing several cousins in the Fayetteville, Kingstree, Columbia, Winnsboro and Orangeburg areas, six sisters-in-law and three brothers-in-law, numerous nieces and nephews, and a host of lifelong friends. In lieu of flowers, memorials may be made to the Alzheimers Association.

The family of Mrs. Barbara Toni Gadegbeku created this Life Tributes page to make it easy to share your memories.

In Loving Memory of Barbara Toni Chandler Gadegbeku
On January...

Send flowers to the Gadegbeku family.