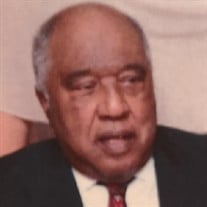 In the early morning hours, another angel joined the heavenly chorus as Bennie F. Bracken, Jr., took his last breath at Prisma Health Richland. Born November 17, 1934, in Kevil, Kentucky, he was the fifth of ten children born to the late Ben Bracken Sr. and Mary Allen Bracken. A graduate of Ballard County High School, he enlisted in the United States Army and served his country for over twenty-seven years. He was stationed at Fort Jackson, and after leaving the military was engaged as a Corrections Officer with the South Carolina Department of Corrections. While stationed at Fort Jackson, he met the love of his life, the former Dorothy Jean Joyner. On November 16, 1961, the two were united in holy matrimony, and to this loving union, two children were born: Frank Bracken and Kimberly Bracken. After marriage, he became a faithful member of Bethlehem Baptist Church where he was a Trustee and sang on the Jubilee Choir. He was a grandfather to many children in the neighborhood. Bennie also volunteered to cut the grass of many neighbors within the community, as well as being a motivational speaker and mentor to many. He was humble, loved his wife, and made sure his children were obedient. He believed in discipline and doing whatever was peaceful. He never said no to a request. Whatever his beloved wife needed, he respected and provided. He was devoted to his family. In addition to his parents and beloved wife, he was preceded in death by six sisters: Beatrice Marie Bounari Johnson, Edna Lee Bounari Johnson, Lawless Charlie Bounari Johnson, Reece Mae Bracken, Emma Jean Bracken, and Elion Yvonne Hale. He leaves to cherish precious memories two children: Frank Bracken and Kimberly Bracken, both of Columbia; three grandchildren: Princess Davis (Antonio) Telford, Gregory (Ashley) Davis and Dwight (Qunetta) Davis; three great-grandchildren: Zy'Eriah Davis, Ja'Vion Douglas Telford, and Antonio Telford, Jr.; two siblings: James Allen "Jackrabbit" Bracken and Nina Lynn Hale; two nephews: Martin Bracken and James Bracken; and a host of other relatives and friends.

In the early morning hours, another angel joined the heavenly chorus as Bennie F. Bracken, Jr., took his last breath at Prisma Health Richland. Born November 17, 1934, in Kevil, Kentucky, he was the fifth of ten children born to the late Ben... View Obituary & Service Information

The family of Bennie Franklin Bracken, Jr. created this Life Tributes page to make it easy to share your memories.

In the early morning hours, another angel joined the heavenly...

Send flowers to the Bracken, family.