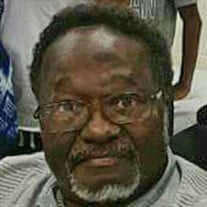 Bennie Lee Crowell was the fourth of seven children born to the late Leander and Rosa Crowell on January 27, 1948, in Winston Salem, NC. Mr. Crowell entered into eternal rest Friday, December 30, 2016, at WJB Dorn VA Hospital. Educated in the Winston Salem Public School system, Mr. Crowell earned his diploma from Carver High School as a member of the Class of 1967. Following his graduation, Mr. Crowell enlisted in the US Army where he would proudly serve for 20 years, ultimately attaining the rank of Sargeant First Class. While on leave, Mr. Crowell's sister invited him to her friend's house for a night of fellowship and cards. There he met the love of his life, Emma Norris. In 1971, the couple married and to this union were born two children: Francoise Crowell and the late Bennie Lee Crowell, II. After retiring from the Army, Mr. Crowell relocated his family to Columbia, SC, where he diligently worked for the US Postal Service for five years before retiring. A proud veteran, Mr. Crowell held memberships in both the Combat Veterans Assocation and the VFW. An avid card player, he often travelled with the Columbia Enforcers Pennoncelle Club thorughout the US to tournaments and other engagements. In addition to his parents and son, Mr. Crowell was preceded in death by his sister, Juanita Johnson. Mr. Crowell leaves to cherish precious memories his beloved wife of 45 years, Mrs. Emma Crowell of Columbia; a daughter, Francoise Crowell of Columbia; two grandchildren: Xavier Crowell and Diandria Crowell-Davis, both of Columbia; four sisters: Martha Cross, Ruthie Davis, Shirley (Willie) Singeltary, and Catharine (William) Heyer, all of Winston Sales; a brother, Lysander Crowell of Winston Salem; his mother-in-law, Albertha Odom of Winston Salem; two sisters-in-law: Daisy Glover of Orangeburg, SC, and Mary (Joseph) Shivers of HUdson, NY; and a host of nieces, nephews, other relatives, and firends who will dearly miss his presence.

The family of Bennie Lee Crowell created this Life Tributes page to make it easy to share your memories.

Bennie Lee Crowell was the fourth of seven children born to the...

Send flowers to the Crowell family.