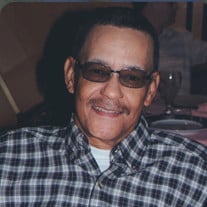 Bernard Floyd Hollis, affectionately known as "Bern," departed this earthly life to be with the Lord on Wednesday, November 27, 2019, at the Lexington Medical Center in West Columbia, South Carolina. Born August 6, 1945, in Charleston, South Carolina, Bern was the beloved son of the late Reverend Jerry M and Delia Nelson Hollis. Growing up in Columbia, South Carolina, Bern graduated from C.A. Johnson High School in the Class of 1963. He went on to earn an Electronics Certification from Atlanta University (now Clark Atlanta University). Self-employed, he ran his own electronics repair business for over forty years. Bernard also kept himself a busy entrepreneur by having his own car dealer's license, real estate certification, and a vehicle interior/exterior upholstery business. In 1971, Bern met the love of his life, the former Carol Sims, and on July 4, 1972, they joined in matrimony. From this blessed union came four wonderful children: Vodray, Jeron, Chrystal and Nekara. Bernard was a devoted husband, father, and "Pa-Pop" well-known for great cookouts, tremendous generosity, and a sense of humor often exhibited through sharing funny stories. He never held back on how he felt about anything (whether you wanted to hear it or not), but he always had a listening ear. In addition to his parents, Bern was preceded in death by a brother, Robert Hollis, and a granddaughter, Carsen Hollis. He leaves to cherish precious memories his beloved wife Carol of the home; four children: Vodray B. Hollis of Columbia, Jeron F.D. (LaChina) Hollis of High Point, North Carolina, Chrystal H. (Rasaan) Wiley and Nekara (Robert) Williams, both of Columbia; nine grandchildren: Noah, Kassidi, Tyler, Trayton, Kennadi, Alyssa, Nyzaih, Jhyon, and Shaun; four siblings: Jerry Hollis, Dejaris Martin, Janie (Willie) Caughman, and Vanessa (Ernest) Williams, all of Columbia; an aunt, Beatrice Nelson of Raleigh, North Carolina; a sister-in-law Dorothy Hollis; a host of loving in-laws, nieces, nephews, relatives, and friends.

The family of Bernard Floyd Hollis created this Life Tributes page to make it easy to share your memories.

Send flowers to the Hollis family.