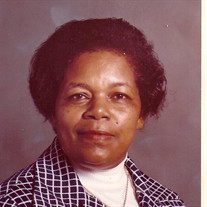 Life Reflections “God called our sweet mother and family member home to be with him on Sunday, August 30, 2015 at the Trident Medical Center in Charleston, South Carolina.” Bernice was the second of three children born to the late George Hunter and Earline Gary Hunter on March 13, 1933 in Sumter, South Carolina. She attended public schools and graduated from Lincoln High School in 1952. She continued her education at Morris College in Sumter, South Carolina where she received a Bachelor of Arts Degree in 1956. Bernice married Abram Dicks Jr. in July 1954. Seven children, two girls and five boys, were born to their union. In addition to her parents, she was preceded in death by her husband, Abram in May, 1997, her son, Duane Leslie Dicks in 1993, and her brother Ulysses Hunter (Jumpy) in 1997. Mrs. Dicks professional career began as a math and science teacher at Ebenezer High School in Dalzell, South Carolina in the early 1960s. She would later hold teachIng positions at Ashwood Central High School, Bishopville High School and Mount Pleasant High School. She retired in 1995 after more than 30 years of educating children in Sumter and Lee Counties. Bernice was a dedicated child, sister, wife, mother, grandmother, great-grandmother and aunt. She loved to sing and music was so important to her that she decided to take piano lessons, after retirement. She always spoke fondly of her singing group, The Tonettes of Sumter. Bernice was also an avid reader and surrounded herself with books especially those written by Danielle Steele. She really enjoyed her work in the church where she served as President and Member of the United Methodist Women. She was also a certified Lay Speaker and served willingly and faithfully where ever needed in the church. She loved and enjoyed her family and especially loved wearing her "grandmother sweatshirt" that listed all of her grandchildren and great-grandchildren by name. She leaves to cherish her memory: two daughters, Betty D. (Fermon) Owens, Indianapolis, IN., and Lynne D. (Henry ) Magazine, Bishopville, SC; four sons, Carl K. (Louvetta) Dicks, Rock Hill, SC, Abram A. (Millie) Dicks, Charleston, SC, Wayne A. Dicks and Bryan C. Dicks of Sumter SC; ten grandchildren; seven great-grandchildren; one sister, Agnes Hunter (Harmon) Rogers of Patterson, NJ; a host of nieces, nephews, god-children, and many close relatives and friends.

Life Reflections &#8220;God called our sweet mother and family member home to be with him on Sunday, August 30, 2015 at the Trident Medical Center in Charleston, South Carolina.&#8221;... View Obituary & Service Information

The family of Bernice Hunter Dicks created this Life Tributes page to make it easy to share your memories.

Send flowers to the Dicks family.