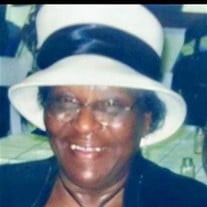 Bernice McFadden, 85, wife of the late Maxie McFadden, transitioned on Wednesday, February, 14, 2018 at her residence. Born in Kingstree, SC on January 11, 1933, she was a daughter of the late Willie Brockington and the late Alma Garrett.... View Obituary & Service Information

The family of Bernice Brockington McFadden created this Life Tributes page to make it easy to share your memories.

Send flowers to the McFadden family.