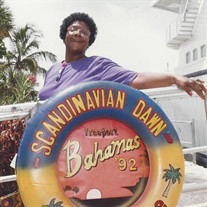 In the early morning hours of December 10, 2019, the Lord sent his angels down to call another soul home to glory. Bernice Harris Warren quietly took her last breath at her residence in Columbia, South Carolina. Born September 14, 1930, in Kershaw, Lancaster County, she was a daughter of the late Benjamin and Hattie McCain Seegars. Educated in the Lancaster County School District, she earned a Practical Nursing degree from the University of North Carolina at Greensboro at the behest of her employer, the late Dr. Frank Reid Brown. She enjoyed a nursing career that spanned over twenty-three years before her retirement. A devoted member of the United Institutional Baptist Church of Greensboro, North Carolina, for over thirty years, she served in multiple capacities: church nurse; member of the UIBC Hour of Power/Ever Ready Chorus; Missionary Committee and wherever needed. A member of the Order of the Eastern Star, Jasmine Order, she was crowned Queen and was known for her love of dance. She married the love of life, Charlie Warren in Greensboro, North Carolina. A fun-loving woman with a big personality, Bernice enjoyed crocheting, word puzzles, attending church, travel, and especially dancing. She was affectionately known as the “Queen of Dance” at her nursing facility. In addition to her parents, she was preceded in death by her only child Laura Ruth Reeves; siblings: Eva Mae Izzard, Billie Dan Seegars, Vivian Seegars, and Paul Seegars; a son-on-law James Reeves; and a great-granddaughter, Iris Denise Armstrong. She leaves to cherish precious memories four grandchildren: Frank (Djwana) Reeves, Brenda Monteleone, Crystal (Gerald) Smith, and Cassandra Reeves; five great-grandchildren: Emerald Smith, Julius Smith, Aron Smith, Terrance Smith, and Caleb Reeves; two great-great-grandchildren: Jason Armstrong and Ivan Armstrong; and other relatives and friends.

In the early morning hours of December 10, 2019, the Lord sent his angels down to call another soul home to glory. Bernice Harris Warren quietly took her last breath at her residence in Columbia, South Carolina. Born September 14, 1930, in... View Obituary & Service Information

The family of Bernice Harris Warren created this Life Tributes page to make it easy to share your memories.

Send flowers to the Warren family.