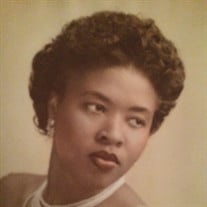 Bessie Blackwell departed this earthly life peacefully on Friday, June 23, 2017 at home in Mays Landing, New Jersey, surrounded by her family. Born in Walterboro, South Carolina, on August 16, 1921, she was a daughter of the late Simon Green and Fannie Middleton Green. Mrs. Blackwell Bessie was educated in the public schools of Colleton County. She met the love of her life, Robert Blackwell, while he was stationed at Westover Airforce Base, Springfield Massachusetts. Robert and Bessie married and were blessed with two loving sons: Robert and Steven. As a military family serving in the United Sates Army, and later the United States Air-Force, they traveled extensively stateside and abroad making many life-long friends. Mrs. Blackwell was employed for many years as a Resident Aide at Woodbine Development Center in New Jersey and retired in 1988. After her retirement, they returned to the Sumter Community and joined Second Presbyterian Church (USA). Mrs. Blackwell served faithfully as a deacon, as usher, a member of the Presbyterian Women and attended Sunday school and Bible study, just to name a few of her church involvements. Bessie was known by those closest to her for giving unsolicited, but welcomed advice. She was not one to bite her tongue or sugar coat anything. She taught a lot of life lessons. She was a woman of strong resolve, yet she was as tender as a butterfly. Bessie was a gracious host and an excellent cook. She was always ready to serve her family and friends and really enjoyed spending time with them. Her grandchildren were a source of pride. She loved having them spend the summers with her, she kept them busy with activities and made sure they went to visit other relatives including those in nursing homes. In addition to her parents and husband, she was preceded in death by a son, Robert Blackwell, Sr. Those left to cherish her precious memories are: a son, Steven G. (Deborah) Blackwell, Sr.; seven grandchildren: Bryan Hayes, CWO2 Steven G. (Monique) Blackwell, Jr., Kiera, Blackwell, Chanel (Duane) Williams, Joshua Mclaurin, Michael Blackwell and Nikkita (Robert) Richardson; nine great-grandchildren : Paloma, Paul, Shawn, Stevie, Brije’Pascha, Sy’niaa, Saralya, and Cheyenne ; two sisters, Rose Burrell and Henrietta Farmer and a host of relatives and friends.

Bessie Blackwell departed this earthly life peacefully on Friday, June 23, 2017 at home in Mays Landing, New Jersey, surrounded by her family. Born in Walterboro, South Carolina, on August 16, 1921, she was a daughter of the late Simon Green... View Obituary & Service Information

The family of Bessie Blackwell created this Life Tributes page to make it easy to share your memories.

Send flowers to the Blackwell family.