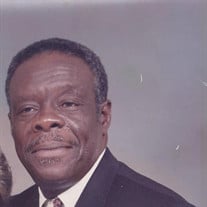 On Sunday, February 10, 2019, the Lord sent down His angels and called another warrior home to rest; Billy E. Singletary, Sr. transitioned at Palmetto Health Richland. Born April 18, 1936, in Lake City, South Carolina, he was the fourth of six children to the late Harvey and Eulee Barr Singletary. He was a graduate of Carver High School in the Class of 1952. He found employment with the SC Department of Mental Health for many years before working for the Fort Jackson Army Air Force Exchange, before his final placement as a foreman with CSX Railroad before his retirement in 1986. He accepted Christ at New Zion Baptist Church (Lake City), and in 1958, he joined Zion Conway and later joined New Ebenezer Church, where he was ordained as a deacon. In the early 1980s, he joined Bethleham Baptist (College Place) where he would serve on the Deacon Board and with the Inspirational Singers. Within his community, Billy served with various Masonic organizations including: Past Master of Corinthian Lodge #11; CC Johnson Consistory #136 as a 33rd Degree; and Honorary Past Potentate of Cairo Temple #125. In 1956, he met the love of his life, the former Betty Samuel, at Kay Branch Baptist Church (her father's church) at church in Hartsville, and the two married October 25, 1958, in Hartsville. Two children were born to his loving union that lasted forty-five years until Betty was called to glory. In addition to his parents and beloved wife; he was preceded in death by three siblings: Alberta Myers, Rev. Cohen Singletary, and Lenue Singletary. He leaves to cherish precious memories two children: LaVonda Willams and Billy E. (Yolanda) Singletary, Jr.; two granddaughters: Danielle Nicole (Paul, Jr.) Anderson and Alyssa Michelle Singletary; one great-grandson, Peyton Antonio Anderson; two sisters: Betty Little and Rosa Nowlin; and other relatives and friends. In lieu of flowers, the family requests memorial donations to the Betty S. Singletary Scholarship Fund at Bethlehem Baptist Church 1028 Eastman Street Columbia, South Carolina 29203.

On Sunday, February 10, 2019, the Lord sent down His angels and called another warrior home to rest; Billy E. Singletary, Sr. transitioned at Palmetto Health Richland. Born April 18, 1936, in Lake City, South Carolina, he was the fourth of... View Obituary & Service Information

The family of Billy E. Singletary, Sr created this Life Tributes page to make it easy to share your memories.

Send flowers to the Singletary, family.