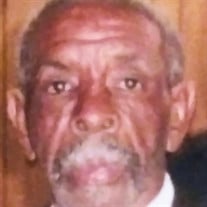 Life Reflections Today is “A GRAND CELEBRATION OF LIFE” honoring Bobby Rhodes. We are celebrating and honoring the life and memories of a man who enjoyed life and ensured everyone around him did the same. Bobby took pleasure in seeking out the simple joys of Life. His laughter was contagious, and his personality was filled with joy. Today we honor the life of Mr. Bobby Rhodes. Bobby Rhodes, also known as “Mac,” and Uncle Bobby, “attended Sumter County Schools and later was employed by Brown and Martin Construction for over 40 years. In 1994, he joined Mt. Zion Missionary Baptist Church in Sumter, S.C., where he began his Christian journey. Bobby loved spending time with his family and friends and, he also had a love for Baseball and Football. His favorite baseball team was the Los Angeles Dodgers and his favorite football team, The Dallas Cowboys. One of his most enjoyed past times was watching sports with his nephews. He also enjoyed family gatherings, where playing cards, singing and laughing with his family members was more than grand. Those times will always remain in the hearts of his loved ones forever. Many family and friends came together to make sure Bobby was taken care of, like he had done so many times for his family members, and the family is forever thankful, especially, Bacorey Tindal. Bobby was beyond GRAND during the time he was with us. Grand is not meant in the form of monetary value, such as, a 100 Grand, he was beyond Rich. Bobby was Rich with love, friendship, personality, pride, confidence, laughter, and even more love. Grand is magnificent, a high rank as well as the largest or the most important item of its kind and Bobby has made a Grand Entrance into Heaven and is now sitting on the throne with the Lord Grandly smiling down on each and every one of us. Besides his parents, Bobby was preceded in death by four sisters: Celeste Rhodes , Viola Baxter, Betty Rhodes, and Pearl Richardson, and two brothers David “Winky” Rhodes and Isaac ” Jim Daddy/Gip“ Rhodes. Loving memories will be cherished by his brothers: Eddie (Mildred) Rhodes of Havre’ De Grace, Sammie Rhodes, Charles Rhodes, and Peter Rhodes; his sisters, Sarah (Michael) Tindal, and Gloria Jean’ Wells; his brothers-in-law, Lawrence Baxter and Ricardo Richardson; a very special nephew/friend brother, Prince Rhodes, who

Life Reflections Today is &#8220;A GRAND CELEBRATION OF LIFE&#8221; honoring Bobby Rhodes. We are celebrating and honoring the life and memories of a man who enjoyed life and ensured everyone around him did the same.... View Obituary & Service Information

The family of Mr. Bobby Rhodes created this Life Tributes page to make it easy to share your memories.

Life Reflections
Today is “A GRAND CELEBRATION OF LIFE” honoring...

Send flowers to the Rhodes family.