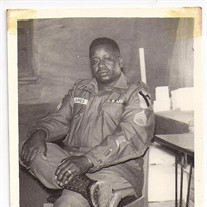 Mr. Carl James, Sr. departed this earthly life and entered into eternal rest on Tuesday, February 5, 2019 at his residence in Sumter, South Carolina. Carl was the first of nine children born to the late Raymond and Edith James (Sallie Davis James) in Sumter. He was raised in Congruity Presbyterian church and later after marriage joined Mt. Pisgah A.M. E. Church, where he served faithfully on the Steward Board and in the Sons of Allen. He was educated in the Congruity Public Schools and was a graduate of Congruity High School in the Class of 1950. While in school, he loved sports and was an avid basketball player. After High School, he served his country In the United States Army where he traveled extensively abroad, stateside and retired after twenty-three years of service. In 1953, he met the love of his life, Emily Dixon and they married April 26, 1958 in Colorado and to this loving union, three children were born, Arnold, Sheila and Carl, Jr. After his retirement from the Army, he was employed by Sumter School District Seventeen for many years. In his spare time, he enjoyed working with the church and watching his favorite TV Shows. Mr. James was a humble and quiet man with strong convictions. His presence will be revered and deeply missed by all who knew and loved him. In addition to his parents, he was preceded in death by a son, Carl James. Jr. ; two sisters Lula Roberts and Mary A. James Those left to cherish his memories are, his loving wife of the home, Emily Dixon James, a daughter, Sheila A. James, Augusta, GA; son Arnold B. (Aida) James, Fredrick, MD; two granddaughters, Ani and Ave’ James; five sisters, Edith (Malachi) Wells, Waterford CT, Shirley A. James, Sumter, SC ,Ella Wells, Rock Hill, SC, Sarah Chiles, Columbia, SC, Ella (John) Gooden, Moncks Corner, SC amd one brother, Charles James, Elizabeth, New Jersey and a host of nieces nephews, cousins and dear friends ,

The family of Carl James Sr created this Life Tributes page to make it easy to share your memories.

Send flowers to the James family.