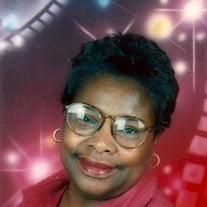 Carolyn Brown departed this earthly life and entered into her final resting place on Sunday, April 15, 2018 at Palmetto Health Baptist in Columbia, South Carolina. Born on September 16, 1940 and raised in Philadelphia, Pennsylvania, she was the daughter of the late James and Mary Toliver Williams. Carolyn was a graduate of Dobins High School in Philadelphia. After graduation, Carolyn met the love of her life in New Jersey, the late Shelton Brown, Sr. They were united in Holy Matrimony and to this loving union two children were born, Joanne and Shelton Brown, Jr. As a military family, Mrs. Brown traveled extensively with her husband during his military tenure as a Master Sergeant in the United States Air Force. They visited many foreign and stateside cities and finally retired at the Shaw Air Force Base, Sumter. Mrs. Brown began her career as a seamstress at Porter Master’s in Philadelphia and after moving to the Sumter Community, she was employed by Shaw Cleaners of Shaw Airforce Base Sumter, where she retired. Mrs. Brown attended St. Mark United Methodist Church of Sumter with her husband. She was a very loving and caring mother, grandmother, auntie and friend and was known for her quiet spirit and her soft spoken voice. Carolyn was the matron of the family and in her spare time, she enjoyed the company of her children; they especially enjoyed shopping together. Carolyn will sincerely be missed by all her family and friends. In addition to her parents and husband, she was preceded in death by two sisters, Sandra Williams and Celestine and her husband Eugene Maddox, Sr. and a brother Clarence Williams Those left to cherish her precious memories are: a loving daughter, Joanne (Robert) Burns; a son Shelton Brown, Jr. ; a grandson, Robert Burns, Jr. all of Sumter, SC ; a great-grandson, Jayshawn Burns of Columbia, S.C; brothers: Charles Williams and his special friend Cynthia Davis, Albert (Jackie) Corley in-laws, Sandy Williams all of Philadelphia, PA , Harnetha Brown Parks, Greensboro, North Carolina, Johnnie Mae Bailey, California, Benjamin Brown of Maryland and Gordon Brown, Winston Salem, North Carolina and a host of nieces ,nephews, cousin and dear friends .

The family of Carolyn Brown created this Life Tributes page to make it easy to share your memories.

Carolyn Brown departed this earthly life and entered into her...