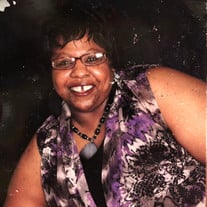 Carolyn Rhodes Ford, transitioned from this world into eternity on March 11, 2019. She was born April 8th, 1960 in Sumter South Carolina to the late Frank Washington and late Celeste Azalee Rhodes. She departed this life on March 11th, 2019 at Augusta University of Augusta, Georgia. Carolyn was raised in a loving home where she learned at an early age to put God first and to love and respect others. She was baptized at an early age and participated at Mt. Zion Missionary Church. She had a compassionate heart, always willing to give to anyone, and undying love for her family. She was educated in the public schools of Sumter S.C. Carolyn, affectionately called “Cat” was a “people person” she was jovial, loveable and was loved by everyone she encountered. Her bright smile would light up a room and her sense of humor would always put a smile on your face. She valued the gift of family and friendship. Cat enjoyed shopping, planning gatherings, playing solitaire, making others laugh and cooking. Carolyn was proceeded in death by her parents Frank Washington, Celeste Azalee Rhodes, and brother Nathaniel Rhodes. Although Carolyn’s sweet physical presence is no longer with us, her memory will live forever in the minds and hearts of all who were fortunate to have known and loved her. She leaves to cherish precious memories her husband Herbert Calvin Ford; Six children: Felicia Rhodes (Augusta Ga), Travesia (Earl)Wallace (Tampa FL), Moscoe (Shantel)Rhodes (Augusta Ga), Calvin Ford (Columbia SC), Randy Condary (Texas) and Sir Richard Ford (Bronx NY). Seven grandchildren Tejuanna Rhodes “Shay”, Rha’Quan Rhodes “Quan”, Mya Ford, Akeem Wallace, Jordain Francis, Mekayla Loney, Tionna Loney; her sisters Elaine Rhodes, and Melinda “Johnny” Johnson and a mother-in-law Dorothy Ford (Bronx NY),. She also leaves to mourn of host and nieces, nephews, aunts, uncles, cousins, and extended family.

Carolyn Rhodes Ford, transitioned from this world into eternity on March 11, 2019. She was born April 8th, 1960 in Sumter South Carolina to the late Frank Washington and late Celeste Azalee Rhodes. She departed this life on March 11th, 2019... View Obituary & Service Information

The family of Carolyn Rhodes Ford created this Life Tributes page to make it easy to share your memories.

Carolyn Rhodes Ford, transitioned from this world into eternity...

Send flowers to the Ford family.