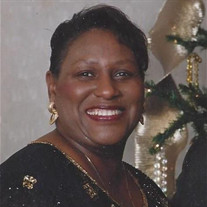 I have fought the good fight, I have finished the race, I have kept the faith. II Timothy 4:7 Carolyn Jean Walker Thompson was born October 9, 1953, in Columbia, South Carolina, to the late Rubin and Myrdis Baxter Walker. Teresa Walker Jester, her sister, preceded her in death. Carolyn peacefully departed this life to spend eternity with God on Tuesday, May 15, 218, at Palmetto Health Richland, Columbia. Even through her illness, Carolyn's life and resilience encouraged others in the faith and was an inspiration to everyone who was blessed to have known her. Carolyn attended the Richland County public schools and graduated from A.C. Flora High School in 1971. She continued her education at South Carolina State University and transferred to Morgan State University in Baltimore, Maryland, where she received a Bachelor of Arts degree, majoring in Speech Communication in 1977. Carolyn was a member of the Henderson-Davis Players of South Carolina State University where she participated in many theatrical plays as an actress for which she received many recognitions and awards for her performances. She was also a member of the Delta Psi Omega Drama Club. Carolyn was gifted as an extraordinary writer and orator for which she received numerous accolades and awards. Carolyn continued to pursue further studies at Johns Hopkins University where she received a Master's Degree in Health Administration. She relocated to Columbia and was employed at Allstate Insurance Company as a Claims Adjuster and later at BlueCrossBlueShield of South Carolina as a Medicare Fraud Analyst and Worker's Compensation Subrogation Analyst. She later attended the University of South Carolina and was certified to teach in Richland County public schools. Carolyn began her teaching career in 2001 at Southeast Middle School where she taught Speech and Drama. SHe later taught at W.G. Sanders Middle School and W.A. Perry Middle School where she established the first Oratorical Contest for both schools. Carolyn loved teaching, following her mother's legacy, and retired from Richland County School District One after 12 years of service. Carolyn was united in marriage for 40 years to her faithful husband, Vernon B. Thompson. God blessed this union with two beautiful children, Chrishawna and Trey, and a loving granddaughter Taylor. Carolyn's Christian journey exemplified what it meant to walk by faith and not by sight. She was a faithful and devoted wife, mother, and grandmother. She loved her family and took pride in their accomplishments and achievements. She instilled the importance of good education in her children and grandchild just as her mother did for her. She was also a mentor to young adults, serving on the Killingsworth Home Board of Directors and the Columbia Bethlehem Community Center Board. As a lifetime member of Wesley United Methodist, she served faithfully in various capacities in the local church, district, and state level. Carolyn loved her church and was committed to worshiping and serving God. Carolyn continued to work, even when she was unable to attend due to illness, by making phone calls to the church visitors. Carolyn served as a Trustee, Lay Speaker, Superintendent of the Sunday School, Sunday School Teacher, member of the Building Committee, Communion Steward, Recording Secretary for the Charge Conference, member of the Young Adult Choir, member of the Wesley Musical Choir, and member of United Methodist Women in the district and state level. Carolyn became the first African-American Vice President for the Columbia District United Methodist Women and later became the first African-American President. Carolyn leaves to cherish her loving memory: her devoted husband, Vernon B. Thompson; a daughter, Chrishawna; a son, Trey; a loving granddaughter, Taylor; a dedicated brother, Michael (Sandra) Walker, all of Columbia; two aunts: Reba Bullock and Celestine (Julian) Morgan of Baltimore; three uncles: Clarence Walker of Philadelphia, Pennsylvania, Wilbur Baxter of Baltimore, and Ralph Baxter of North, South Carolina; three sisters-in-law: Susanne (Joe) Smith, Elouise (Thomas) Lemon, and Gwendolyn Body; three brothers-in-law: Johnnie (Rochelle) Thompson, Jr., Charles (Virginia) Thompson, and Robert Jester; and a host of nieces, nephews, cousins, and friends.

I have fought the good fight, I have finished the race, I have kept the faith. II Timothy 4:7 Carolyn Jean Walker Thompson was born October 9, 1953, in Columbia, South Carolina, to the late Rubin and Myrdis Baxter Walker. Teresa Walker Jester,... View Obituary & Service Information

The family of Carolyn Walker Thompson created this Life Tributes page to make it easy to share your memories.

I have fought the good fight, I have finished the race, I have...

Send flowers to the Thompson family.