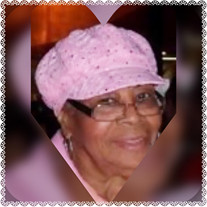 Mrs. Catherine Walls McRae, affectionately known as Aunt Kitty and Miss Kitty, departed this earthly life on Sunday, February 12, 2017, at the residence of her daughter, Sheila, in Columbia, South Carolina. Born in Milledgeville, Georgia, on July 14, 1936. She was the second of four children born to the late George Walls and Irene Cummings Walls. At an early age, Miss Kitty was baptized at the Mt. Mariah Baptist Church in Georgia, and at the age of 14, she moved to Elizabeth, New Jersey, and joined the New Zion Baptist Church. She served faithfully in many capacities including: President of the Young Adult and Senior Choirs; Chairperson of the Women’s Day Committee; the Sunday School; and was the loving face of the New Zion Fellowship. After retiring and relocating to the Columbia community, she joined Brookland Baptist Church. Educated in the New Jersey Public School system, Miss Kitty was a graduate of Edison Vocational High School, Elizabeth, New Jersey, in the Class of 1956. In April of 1957, she was united in holy matrimony to Robert Lee McRae, and to this loving union five children were born. Robert was the love of her life, and they were blessed to share fifty-one years of marital bliss and togetherness until he went home to be with the Lord on June 12, 2008. Miss Kitty was renowned for her cooking, in particular her sweet potato pie and peach cobbler, which were neighborhood favorites in the Elizabeth community. Spending time with her grandchildren was the highlight of her life, and she often spent time preparing their favorite dishes in anticipation of their visits. In addition to her parents and beloved husband, Miss Kitty was preceded in death by a sister, Ellastine Walls. She leaves to cherish precious memories her daughters: Cheryl McRae of Linden, New Jersey, Sheila (Dwayne) Randolph of Columbia, Robin McNeill of Fort Worth, Texas, and Dr. Valerie McRae (Jonny) Jacobs of Manalapan, New Jersey; her son, Timothy (Kim) McRae of Elizabeth, New Jersey; five grandchildren: Ashley, Philip, Robert (Caitlin), Chelsea, and Christopher; two sisters: Mary Whitted of Buford, Georgia, and Ann Grundy of Mt. Olive, North Carolina; nieces; nephews; and a host of other relatives and friends.

The family of Catherine Walls McRae created this Life Tributes page to make it easy to share your memories.

Send flowers to the McRae family.