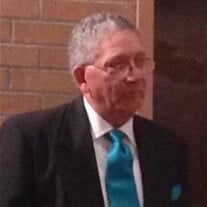 Champ Pearson, Jr. was called from labor to reward on Friday, October 27, 2017, in the early morning hours at his home in Elgin, SC. He was born June 13, 1940, in Bennettsville, SC, to the late Champ Pearson, Sr., and Louise Walls Pearson; he was his mother's second son. Champ attended Marlboro County public schools and grew up attending to many jobs on the family farm, including caring for the livestock. A Boy Scout, Champ also was a collector of various items, a wood chopper, and a student athlete playing football. He attended Mount Zion Baptist Church in what was then called Tatum, SC, where he accepted Christ as his Lord and Savior at a young age. Throughout his lifetime, he held many jobs including: truck driver, shipping clerk, baker, and barber. One of his favorite jobs was baking, and doughnuts were his specialty. Anyone coming into the bakery wanting a cake decorated would have it within fifteen minutes. His favorite cake flavor was pineapple. His loved food in general, and some of his fondest memories growing up were having dinner with his family. His favorite holiday was Christmas because not only do you receive presents, but you also have the opportunity to give presents as well. His best gift from God was meeting the love of his life, Gloria Howell, in Florence, SC, while playing bingo. After a brief courtship, they were married on January 7, 1967, in Bennettsville, SC. To their union, a daughter, Janet Marlene, was born. The family resided in various cities in NC and SC, choosing both Florence, SC, and Moore, SC for extended periods of time. Champ continued in his role as protector and nurturer of the women in his life, traits he learned as young child caring for his younger sisters. His philosophy towards the treatment of women when meeting their suitors was "you can't take her out of the White House and put her in the poor house." His Christian faith allowed him to take care of the people around him; his nurturing continued after his father's death, as he and his siblings took on the role of caring for their mother. He was ordained as a Deacon in August 1977, at Macedonia Baptist Church in Darlington, SC. The family relocated to the upstate area and joined Foster's Grove Baptist Church in Chesnee, SC, where he participated on the choir and later became Chairman of the Deacon Board. After Gloria retired, they relocated to Elgin, SC, to be closer to Marlene and her growing family. They also became members of New St. Thomas RE Church in Columbia, SC, where he served on the Vestry Board, Superintendent of the Sunday School, and a member of the choir. In October 2015, he joined Fort Clark Baptist, his current home church, in Elgin, SC. Champ lived his Christian faith by ministering to others, even as he worked in his barber shops. A lifelong learner, he always felt it was best to reach out to others in their time of need. He mentored many young men in the community, especially those that came to his shop, even if it was something as simple as saying "pull up your pants." No matter what he said to anyone, they always knew he was saying it to help them, and even it was later, they would appreciate it. He was also a diehard Clemson Tigers and Dallas Cowboys fan, and would track his teams during the season on the team's game calendar. In addition to his father, Champ was preceded in death by his brother Clemon Walls and two sisters: Frances Wheeler and Thomasena David. Mr. Pearson leaves to cherish precious memories his sweetheart and bride of fifty years Gloria; his daughter Janet Marlene (Leonard) Frierson of Columbia; two granddaughters: Alana and Maddyson; his mother Louise W. Pearson of Bishopville, SC; a sister Retha (Sam) Burrell of Bennettsville; four brothers-in-law: James Wheeler, Jr., of Bennettsville, Thomas David of Brooklyn, NY, Harris L. (Mary A.) Howell of Jersey City, NJ, and Clayton T. (aka Mack) Howell of St. Stephen, SC; three sisters-in-law: Carolyn H. (Charles) Spearman of St. Stephen, Rebecca H. (Willie Ray) Monds of Erwin, NC, and Julie Howell of Alvin, SC; three godchildren: Miriam Perkins-Smith, KaNeesha V. Jones and Quenton A. Jones; and a host of nieces, nephews, and other relatives and friends.

Champ Pearson, Jr. was called from labor to reward on Friday, October 27, 2017, in the early morning hours at his home in Elgin, SC. He was born June 13, 1940, in Bennettsville, SC, to the late Champ Pearson, Sr., and Louise Walls Pearson;... View Obituary & Service Information

The family of Champ Pearson, Jr. created this Life Tributes page to make it easy to share your memories.

Champ Pearson, Jr. was called from labor to reward on Friday,...

Send flowers to the Pearson family.