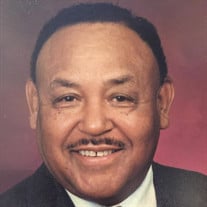 On Wednesday, April 8, 2020, the Lord called another soldier home to glory. Charles Corley took his last breath at Prisma Health Richland in Columbia. Born October 11, 1922, in Irmo, South Carolina, he was one of ten children born to the late Silas P. and Eva H. Corley. While he attended Harbison High School, his education was unfinished due to his aid to his family in running the farm. He married the former Sarah Frances "Frank" Tillman, and their union was blessed with four children. The marriage was a strong and loving one, enduring for sixty-seven years until Frank was called to her eternal home in 2017. A lifelong member of Reid Chapel AME Church, Charles served wherever needed, most notably as a Steward for over thirty years. He also served his community as a member of the Greenview Men's Club. When he wasn't involved in community functions, you could find Charles fishing, hunting, or cooking. In addition to his parents and beloved bride, Charles was preceded in death by a son, Michael Corley; and eight siblings: Heyward Corley, Leroy Corley, Gertrude Kent, Mattie Johnson, Helen Mills, Ruth Simons, Willie Corley, and Wardell Corley. He leaves to cherish precious memories three children: Charles (Margaret) Corley Jr., Carol (Errol) Boler, and Jeffrey Corley; eight grandchildren: Nikki, Jimmy, Blair, Scotty (Karlyn), Shea, Sean, and Clinton; ten great-grandchildren: Skylar, Nia, Nylah, Reya, Denise, Clinton Jr., Zack, Jason, Zara, and Kaylen; a brother, Horace (Teresa) Corley; a daughter-in-law, Lori Corley; a host of other relatives and friends who will miss him dearly. A memorial service will be held later in the year, and the family requests that no flowers be sent at this time.

On Wednesday, April 8, 2020, the Lord called another soldier home to glory. Charles Corley took his last breath at Prisma Health Richland in Columbia. Born October 11, 1922, in Irmo, South Carolina, he was one of ten children born to the late... View Obituary & Service Information

The family of Charles S Corley created this Life Tributes page to make it easy to share your memories.

Send flowers to the Corley family.