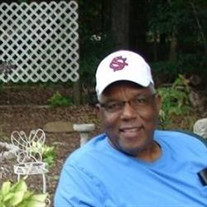 Charles Edward Randle, Sr., son of the late William C.. Randle, Sr. and Lucy A. Booker, departed this life on Tuesday, August 7, 2018, surrounded by his family. Charles was born on December 9, 1939, in Burkeville, Virginia. He was the youngest of five children: Mary Magdalene, Robert Roosevelt, William Cleveland, and Rosa Emma. He was introduced to working at the young age of seven where would pick up rocks, round up cows, and clean the barns on Burkesville Guernsey Farm. Shortly after that, he was introduced to working in the garden and hayfields at home on the farm. Throughout his life, as an extension of his past farming, he planted his own trees and flowers twice a year in his yard. Growing up, he attended High Rock Baptist Church in Rice, Virginia, where he was baptized at age five outside in the cold September weather. In later years, Charles was a faithful member in good standing with Second Nazareth Baptist Church. Charles received his formal education attending Morning Star Elementary and Foster High School. He graduated in 1960, after which he served honorably in the United States Army. He ended his tour of duty at Fort Jackson, South Carolina, where he met the love of his life, the former Jenetha Hart. They were joined in holy matrimony on March 6, 1963. Charles continued his education at both Columbia Commercial College and Midlands Technical College in Columbia, South Carolina. He enjoyed a memorable and fulfilling forty years as a local truck driver ending his career at Yellow Freight Systems in 1997. Charles and Jenetha lived a life full of love and joy for fifty-five years, and were rarely seen without each other. They cherished lively conversations and shared an enduring, unconditional love. From their union, two sons: Charles E. Randle, Jr., and Matthew T. Randle were born. They spent time with their father hunting, fishing, and reflecting on better times prior to his illness. Charles instilled in them the importance of family, friendship, and service to their country, and inspired them to be well-rounded men. Affectionately known as “PaPa” or “Granddaddy,” Charles was dearly loved by his grandchildren and great-grandchildren. He was a family man, provider, wise counselor, and a friend who always had an answer, and a laugh for anyone who needed it. In addition to his loving parents, he was preceded in death by two sisters: Rosa (James) Casey and Mary Magdalene Chaffin; and a brother, Robert (Martha) Randle, Sr. He leaves to cherish fond memories his beloved wife, Jenetha Randle, of the home; two sons: Charles E. (Trina) Randle, Jr., and Matthew Randle, both of Columbia; eight grandchildren: Courtney Davenport (Gerrard) Roberts of Eugene, Oregon, Kamara (Leamon) Jones of Covington, Georgia, Corey Randle of Brooklyn, New York, Keisha Randle of Columbia, Crystal Randle of Covington, Kelly Randle of Rock Hill, South Carolina, Joshua Randle of Covington, and Kennedy Randle of Columbia; three great-grandchildren: Karsyn Jones, Leilani Jones, and Ezekiel Jones, all of Covington; a brother, William (Gloria) Randle, Jr., of Phoenix, Arizona; a daughter-in-law, Courtney Hughes; and a host of special nieces, nephews, cousins, other relatives, and friends.

Charles Edward Randle, Sr., son of the late William C.. Randle, Sr. and Lucy A. Booker, departed this life on Tuesday, August 7, 2018, surrounded by his family. Charles was born on December 9, 1939, in Burkeville, Virginia. He was the youngest... View Obituary & Service Information

The family of Charles E. Randle Sr. created this Life Tributes page to make it easy to share your memories.

Send flowers to the Randle family.