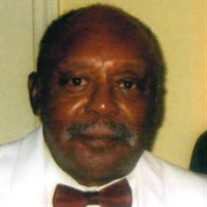 On November 29, 2020, Charles Wilson exchanged his earthly labor for his heavenly reward in Sumter, South Carolina. Charles Wilson was born June 12, 1936 in Winston-Salem, North Carolina, a son of the late John Hicks and Almeta Harraway. When he was young, his family moved to New York and he was raised in the Bronx. Charlie chose to leave school early and join the United States Army to help support his family. He served from 1953 until 1960 when he was honorably discharged. Charlie traveled to many places during his tour of duty. After his discharge, he gained employment with the New York City Transit Authority where he worked for twenty years. Charles loved to travel. He was a giving and thoughtful man, His honesty and humor bought joy to many lives. O In addition to his parents, he was preceded in death by his wife, Rose Wilson; daughter, Nina Wilson, three brothers, Jimmy, David, and George. Those left to cherish his memories are his two grandsons, Charles Sims and Nolan Sims of Virginia Beach, VA; step-daughter, Gwendolyn (Darin) Peterson of Sumter, SC; additional grandchildren, Taesha Lemmon and Markos (Shakimah) Generette; five great grandchildren, Izaiah, Marley, Evan, Da'shan and Ty'asia; one great great grandchild, Ava; two sisters, Laverne Harraway and Doris Cohen both of New York; a host of nieces, nephews, other relatives and friends

The family of Charles Wilson created this Life Tributes page to make it easy to share your memories.