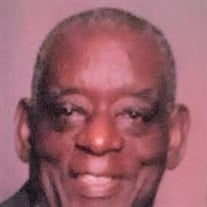 “O when the saints go marching in When the saints go marching in: O Lord I want to be in that number When the saints go marching in” Charlie Choice, Jr, was born on October 22, 1941 and entered into eternal rest on Friday, July 17, 2020 at his home. He was a son of the late Charlie Choice, Sr. and Ethel Johnson Choice. He was educated in Sumter County Schools and attended Ebenezer High School. He began his spiritual journey at High Hills A. M. E. Church, Dalzell, SC, where he was baptized at an early age. Charlie served on the trustee board, the gospel choir, and the male chorus. Serving the Lord through his songs, when Charlie sang, everyone jumped to their feet. Some of those notable songs include I’ll Be Alright, When the Saints Go Marching In, and his signature song, Lord, You’ve Been Good to Me. Charlie was a faithful member of the “Original World Wonders” for 32 years. He was also a founding member of the Hill Boys, Master Mason and a life-time member of the Catchall Masonic Lodge #425. Charlie was formerly married to Martha Webb Choice. To this union four children were born: Judith Ann, Pamela Denise, Carolyn Michelle and LaShonda Tomeka. Although Charlie and Martha were busy raising their family, they lovingly raised four of Martha’s young cousins: Ann, Charlie (Pop), Lawrence (Bub), and Alvern (Scooter) Webb. Affectionately known as “CC” to all he worked with, he was formerly employed at Shaw AFB, Becker Gravel and Sand, Laidlaw (later known as Safety Kleen) Allied Waste, Sumter School District Two, and Sumter School District. Charlie worked at Laidlaw for over 25 years and retired as a supervisor. Charlie married Sheila Ragin Choice at Historic Liberty Hill A. M. E. Church and to this union, one son was born, Nicholas Dimitri. Charlie also became the loving patriarch to Charlene Delores and Durell Antione. As a family man he was always available to help anyone in the family. Some of the best moments were spent at family gatherings and on family trips. No one could share a story or tell a joke better than Charlie. The sincerity in his smile and his laughter will be cherished forever. Traveling was a favorite past time for Charlie and he especially loved road trips. The memorable moments he shared with his friends and family will be treasured forever. His first plane ride was to Dallas, Texas where he was able to visit the Dallas Cowboys stadium and the home of the Texas Rangers. He participated in a mission trip sponsored by his sister in law, Presiding Elder M. Charmaine Ragin Merrick, and traveled to Panama City, Panama. It was his first international trip and he said this was the most beautiful place he had ever visited. Together with his family, he travelled up and down the East Coast. He visited Key West, Florida and talked about driving across the Overseas Bridge for months! His other favorite past time was hanging with his best friends, John and Billy Pinckney. In addition to his parents, Charlie was predeceased by two daughters, Pamela Denise and LaShonda Tomeka; his siblings, Estelle Frazier, Sam Jacobs, Willie Mae Singleton, Rosa Mae Bolden, and Ethel Lee Gavin. Charlie cherished his family: his loving wife, Sheila Ragin Choice of Sumter, SC; his children, Nicholas Dimitri Ragin of San Diego, CA, Durell Antoine (Leighandra) Mitchell of Dalzell, SC, Carolyn Michelle Choice, Judith Ann (Harold) Jackson and Charlene Delores Mitchell of Sumter, SC; his grandchildren, Sherricka Montese Sheppard, Heartlyn Yvonne Miller, Taylor Chauntell Miller, Clayton Jamar “CJ” Miller, Jr., Mason Durell Mitchell, Preston Marcellos James, Sir William Charles James; one great grandson, Kylan Chavis Sheppard; one sister, Amelia Dawson of Charlotte, NC; three sisters in law and three brothers in law. He also cherished many treasured nieces, nephews, cousins and friends. I was supposed to spend the rest of my life with you And then I realized…you spent the rest of your life with me I smile because I know you loved me till the day you went away And will keep loving me…till the day we’re together again. -Love Always and Forever Sheila To attend the graveside service virtually, please log onto https://us04web.zoom.us. The meeting code is: 217 032 2535. Password is: 120 819 62.

The family of Charlie Choice Jr created this Life Tributes page to make it easy to share your memories.

Send flowers to the Choice family.