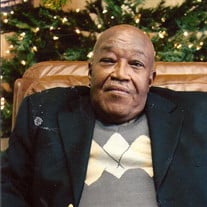 Charlie Conyers, Jr., departed this earthly life to his heavenly home on Wednesday, January 8, 2020 at his residence in Sumter, South Carolina. Born on August 7, 1938 in Wedgefield, South Carolina, he was the second son of six children of the late Charlie and Louise Crosby Conyers, Sr. Charlie was a graduate of Ebenezer High School in the class of 1958. He furthered his education by earning an Associate Degree in Machine Shop in 1988 from the former, Sumter Area Technical College in Sumter, South Carolina. Charlie joined the United States Army on February 25, 1959 and served his country for 24 years until his retirement as Msg. Sergeant on May 31, 1983. He was awarded several achievement medals to include: The Purple Heart, National Defense, Vietnam Service and Campaign Medals, Vietnam Cross of Gallantry with Palm, Good Conduct, Army Commendation, Combat Infantry , Army Service Badges, Overseas Service Bars and Professional Development Ribbons. After retiring from the army, Charlie was employed as a security guard for several years. Charlie was a life-long member of Bethel AME Church, Wedgefield, South Carolina, where he previously held the following positions: President of the Laymen Organization, Trustee, a member of the Men’s Choir, Sons of Allen, Class Leader, and Church Treasurer. He also maintained the church yard and performed other maintenance duties around the church. Charlie was also very active in the Lancaster District and the Columbia Conference of the AME Church. He served as Chaplain for the Lancaster District Laymen Organization, Chaplain of the Columbia Conference Lay Organization and Treasurer for the Lancaster District Sons of Allen. He was also an active member of the Senior Citizens on the Move, South Carolina Combat Veterans, Retired Arm Force Veterans Club, VFW, Disable Veterans and The Purple Hearts Club. Charlie never met a stranger and would inquire about the history of everyone in a person’s family. He could remember details of genealogy and locations of burials like no one else. His “computer memory” made him the go to person if you needed information. Charlie loved his family and people in general. He believed in helping others in any way that he could. He loved his church and participated in events throughout the Lancaster District and the Columbia Conference of the AME Church. His favorite scripture is Philippians 4:13: “I can do all things through Christ who strengthens me.” He was previously married to Dorothy Nixon Conyers and to this union four children were born: Anthony Charles Conyers, Julia Louise Wright, Jennifer Ann Conyers and Darrell Patrick Conyers.

Charlie Conyers, Jr., departed this earthly life to his heavenly home on Wednesday, January 8, 2020 at his residence in Sumter, South Carolina. Born on August 7, 1938 in Wedgefield, South Carolina, he was the second son of six children of the... View Obituary & Service Information

The family of Charlie Conyers Jr created this Life Tributes page to make it easy to share your memories.

Charlie Conyers, Jr., departed this earthly life to his heavenly...

Send flowers to the Conyers family.