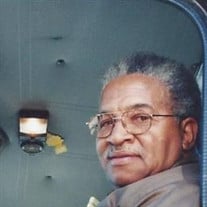 Charlie Mickle, Jr. moved from earthly labor on to his heavenly reward, Sunday, December 2, 2018, in the midst of his family. Born January 23, 1940, in Winnsboro, South Carolina, he was the eldest of sixteen children born to the late Charlie Mickle and Eliza Woods Mickle. Charlie was educated in the public schools of Fairfield County, South Carolina, where he graduated from Fairfield High School as a member of the Class of 1959. Charlie united in Holy Matrimony with the former Louise Annette Devault on February 1962. This loving union was soon joined by three children: Charlie, III, Julius, and Pesante; and was a blessing to both until her death in July 1997. Charlie was a very devoted husband to Annette. Annette and their boys were his priority. Charlie worked for a short time as a firefighter to provide for his family but he always had more to give. The Greenview community was a close-knit family, and Charlie Mickle was one of the patriarchs on Jasmine Lane. He was known to transport the Greenview Eagles to and from their games and was the true epitome of Husband, Daddy, Brother, Son and Friend. His heart was completely strengthened when he fulfilled the needs of each person around him. He wasn’t the soft-fluffy provider, he spoke the truth whether you wanted to hear it or not and then he supported you. UPS would become the career that would carry and provide a comfortable living for his family. He retired after 30 years of service and was celebrated for 25 years of safety in his driving. Charlie, or “Big C,” as he was affectionately known was a very dedicated employee. He proved himself repeatedly as a man of valor. After his 1999 retirement, Charlie continued his life with a new focus. He enjoyed days of spending time with other retirees with travels, breakfast dates, lunch dates and his greatest passion of refurbishing his 1957 Chevrolet. The Midlands Cruisers were a regular for him as he traveled to car shows and won trophies for his beautiful Chevy. It was a joy to his children, sibling and friends to watch him just have fun! Charlie lived his life to the fullest. He lived his life on his terms. The past eight years were different for him as he conquered health challenges. Charlie was cared for by his children and some very special health care professionals who provided him with what he needed. He was surrounded by his children and grandchildren daily who provided him with joy, laughter and great memories. Recently, he did what he has always done and announced that it wouldn’t be long. He gave his family time to get ready because he was ready to move forward. God granted his wish and welcomed him through the gates of heaven peacefully with his family around him. In addition to his parents, Charlie was preceded in death by his beloved wife, Louise Annette Mickle, and five of his fifteen siblings: Mattie Mickle, Delphine (Sally) Jones, Margaret Mickle, Willie Mickle, and Moses Mickle. He leaves to cherish his precious memory, three loving sons: Charlie Mickle, III, Julius (Twanda) Mickle, both of Columbia, and Pesante (Ramnusia) Mickle of Hagerstown, Maryland; ten grandchildren: Destiny, Jerron, Zakiya (Darnell Esper), Charlesa (Candi McCall), Rasheeda, Taneisha, Jasmine, Stephon, Anita, and Jalen: five great-grandchildren: Ryan Roman, Xavier, Reece, and Naomi; five brothers: Samuel (Mattie) Mickle, Robert Mickle, James Mickle, Kelvin Mickle, and Calvin Mickle; five sisters: Jennerine (John) Wallace, Edna (Roger) Craig, Rosa (Melvin) Ingram, Eliza (Wallace) Davis, and Gloria Mickle; two daughter-in-law, Lorraine Mickle and Claudia Mickle; and a host of nieces, nephews, and other loving relatives and caring friends who will miss him dearly.

Charlie Mickle, Jr. moved from earthly labor on to his heavenly reward, Sunday, December 2, 2018, in the midst of his family. Born January 23, 1940, in Winnsboro, South Carolina, he was the eldest of sixteen children born to the late Charlie... View Obituary & Service Information

The family of Charlie Mickle, Jr. created this Life Tributes page to make it easy to share your memories.

Charlie Mickle, Jr. moved from earthly labor on to his heavenly...

Send flowers to the Mickle, family.