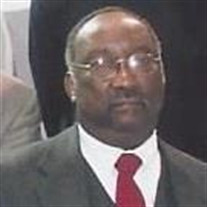 Mr. Charlie Redden, the youngest of ten (10) children of the late Mr. John Peter Redden and Mrs. Lillie Smith Redden was born April 2, 1944 in Kingstree, South Carolina. He resided in Columbia, South Carolina until his transition to be with the Lord on April 5, 2018, at 12:21 AM, at Palmetto Health Richland Hospital in Columbia, South Carolina. Charlie (affectionally known as Uncle Charlie) attended the public schools of Williamsburg County and graduated from Cades High School. He earned his degree in Welding from Denmark Technical College (Denmark Area Trade School). Charlie was employed with Martin Marietta Aggregates, Cayce Rock Quarry, Cayce, South Carolina for over 36 years as Lead Welder. His welding profession carried him to new heights and challenges as new technology arose. These new opportunities provided him with additional studies and in doing so earned him several awards and certificates. After retiring from Martin Marietta, Charlie began his own business as Reddens’ Mobile Welding Service LLC. He thoroughly enjoyed his work as he designed wrought iron rails, bar-be-que grills, trailers and many more items. Charlie was an active member of the Bishops’ Memorial African Methodist Episcopal Church, where he served in the following capacities: Class Leader; Trustee Board; Usher Board; Sons of Allen and Church School member; and various committees. He was honored as the Church Father in 2010. His home church was Beulah African Methodist Episcopal Church in Kingstree, South Carolina. Early in life, he began his walk with the Lord and learned the A.M.E. discipline. At Beulah, Charlie served as Pro Tem of the Trustee Board and Chairman of the Building Fund Committee and Church School Member. Under his leadership, the church members built a Fellowship Hall and retired the mortgage in four years. New stained-glass windows were installed, and the beginning of Friends and Family Day was initiated. He also reinstated the Church Anniversary Program, and this program still exists today. Charlie loved his church and was a servant of the Lord. He enjoyed fishing, hunting, grilling and riding his Harley Davidson. He was a fan of football, he played baseball with a passion as well as basketball. His grandchildren were his heart. He had a passion for serving others and fellowshipping. Membership in Community Organizations included: the 100 Black Men of Columbia Chapter, the Columbia Alumni Chapter of Denmark Technical College, and a Life Membership of the NAACP. His Prince Hall Masonic memberships consisted of Past Master of Capital City Lodge N0. 47, Past Commander-in-Chief of C. C. Johnson Consistory N0. 136 and Past Potentate of Cairo Temple N0. 125. Charlie was honored by Capital City Lodge N0, 47, as “1998 Mason of the Year.” He received numerous awards and certificates from these organizations. On April 3, 1971, Charlie Redden and Sarah Elizabeth Bethea united in Holy Matrimony and their union was blessed with four children. God’s Grace and Mercy allowed Charlie and Sarah to celebrate forty-seven years of marriage on April 3, 2018, and for Charlie to commemorate another birthday on April 2, 2018. In addition to his parents, Charlie was preceded in death by two sisters: Ophelia Hyman and Marian Slade; and four brothers: Roy Redden, Davis Redden, James Redden, and Morris Redden. Charlie Redden will be greatly missed by all who knew him. He leaves to cherish precious memories, his loving and devoted wife Sarah of the home; four children: two sons, Ryan L. Bethea of Trondheim, Norway, and Charlie C. Redden, II of Ridgeland, SC, two daughters, Helen Ophelia (Rodney) Woodard, of Dubai, United Arab Emirates, and Dr. Charlotte Elizabeth (George) Hamilton, Blythewood, SC.; three granddaughters: Reese Woodard, Gabriella E. Hamilton and Camille O. Hamilton; one grandson, Samuel J. Bethea; four sisters-in law, Mrs. Mary Sena Redden, Kingstree, South Carolina, Mrs. Lutricia Gadsen and Mrs. Hattie Y. Blackmon, both of Dillon, South Carolina, and Mrs. LaSandra (Robert) Bass, Florence, South Carolina; three brothers-in-law: Mr. Wilbur Slade, Bronx, New York, Mr. Samuel Lee Bethea and Mr. Derrick L. Bethea, both of Dillon, South Carolina. He was the stepbrother of Mrs. Alma Mouzon, Manning, South Carolina, Willie Ruth Pressley, Sumter, South Carolina, Pastor Dorothy Adams, Charlotte, North Carolina, and David (Gloria) Pendergrass. “For I am now ready to be offered and the time of my departure is at hand. I have fought a good fight, I have finished my course, I have kept the faith. Henceforth there is laid up for me a crown of righteousness, which the Lord, the righteous judge, shall give me at that day: and not to me only, but unto all them also that love his appearing.” 2 Timothy 4: 6-8

Mr. Charlie Redden, the youngest of ten (10) children of the late Mr. John Peter Redden and Mrs. Lillie Smith Redden was born April 2, 1944 in Kingstree, South Carolina. He resided in Columbia, South Carolina until his transition to be with... View Obituary & Service Information

The family of Charlie Redden created this Life Tributes page to make it easy to share your memories.

Send flowers to the Redden family.