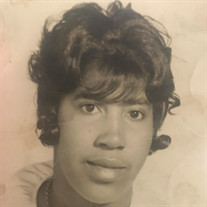 Mrs. Cleo Nixon Anderson, loving daughter of the late David Nixon and Cleo Lloyd Nixon was born on September 7, 1949 in Sumter, South Carolina. She departed her earthly life on Monday, December 10, 2018 at Palmetto Health Tuomey in Sumter, South Carolina. Cleo was educated in the public schools of Sumter, South Carolina. She graduated from Ebenezer High School and furthered her education at Central Carolina. June 1967, she was united in Holy Matrimony to Joseph Anderson, Sr. They decided to move to Bridgeport Connecticut where they became proud parents on a beautiful daughter and three handsome sons. She was employed with Old Remington Arms Munitions for many years in Bridgeport Connecticut. Cleo and Joseph decided there was no place like home and returned to Sumter, South Carolina. Upon returning to Sumter Cleo worked countless years at Ace Textile and Vaughan Bassett until the closing of both companies. Cleo was a woman who loved God, her family and friends. She always kept the faith and praised God for all His blessings. In addition to her parents, she was preceded in death by a daughter, two brothers, and a sister. Cleo leaves to cherish wonderful and precious memories her loving husband Joseph, Sr, three sons Joseph Anderson, Jr. of Bridgeport. Ct., Michael (Victoria) P.) Anderson of Rembert, S.C., Jamie Anderson of the home; one grandson Michael Anderson of Rembert, S.C.; five granddaughters Mikia, Mikayah and Milayah Anderson of Rembert, S.C., Ashley Anderson of Stratford, CT., Mariah Anderson of Raleigh, N.C.; Siblings: Deanna Wardlaw of Columbia, S.C., Minnie Beatty of Dalzell, S.C., Mary Smith of Sumter, S.C. and Janie Hardy of Dalzell, S.C. two sisters-in law, an uncle , a host of nieces, nephews, relatives and friends.

The family of Cleo Anderson created this Life Tributes page to make it easy to share your memories.

Send flowers to the Anderson family.