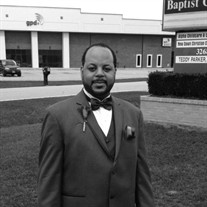 The steps of a good man are ordered by the Lord: and he delighted in his way. Psalm 37:23 Cleophis Von Dervin Bates, affectionately called Von by his family and Cleo by his friends, made his transition from earth to his heavenly home Friday, June 29, 2018 in Columbia, South Carolina. Born January 28, 1969, in Columbia, Richland County, South Carolina, he was the oldest of three children born to Vera Scott-Bates and Cleophis Bates and was a grandson of the late Mr. Willie and Mrs. Lucy Bates and the late Mr. Benjamin and Mrs. Rosa Lee Scott. Von was previously married to Shawnee Collins-Bates, of Blackville, South Carolina, and they were blessed with Four children. Von attended the public schools of Richland County School District Two and graduated from Richland Northeast High School in the Class of 1987. While at Richland Northeast, he played the trombone with the band. Following his high school graduation, Von continued his studies at South Carolina State University. As a youth, Von attended church services at Bethel African Methodist Episcopal Church with his family where, at an early age, he became a member and served as an acolyte. He also participated in outreach activities with the local church. Von loved sports and was an avid Pittsburgh Steelers fan. He was known for his passionate love of fishing, grilling, traveling, and watching movies. Not only did he enjoy spending time with his family, friends, and co-workers, but Von also was very committed to the relationships he had with his children, parents, and his brothers, among others. Von’s most notable love-language was giving. Once entering the workforce, Von was employed by Tee’s Company, Golden State Foods, and most recently, by Trane Industries for 13 years as a welder and brazer. He was also a talented barber. In addition to his grandparents, Von was preceded in death by a brother, Clevon Montoya Bates. He leaves to cherish precious memories his two sons: Collins Xavier Manning Bates and Cleo Vaughn-Dervin Bates; two daughters: Alexis Shavaughn Bates and Corynn Alizabeth Shaveira Bates, all of Columbia; three granddaughters: Sha’niya Bates, Sha’nylah Bates, and Nyomi Bates all of Columbia; his mother Vera Scott-Bates of Columbia; his father Cleophis Bates of Columbia; his brother C. Jason Arthur Bates of Charlotte, North Carolina; four aunts: Mary G. Scott of Columbus, Georgia, Wilhelmenia Broughton, Renay Fulwood, and Minnie Scott, all of Columbia; four uncles: Benjamin Scott, Reginald Scott, and Roland Scott, all of Columbia, and Monroe (Pamela) Haynes of New York; one grandaunt Georgia Ann Pearson of Columbia; a devoted friend treated as a sister Atiya McPherson; a special friend Menyan Sims; and a host of cousins, other devoted friends and loved ones. God has seen fit to give His precious one rest with Him and though we will deeply miss him our loved one; we understand and cling to scripture which tells us, “To be absent from the body is to be present with the Lord. II Corinthians 5:8b”

The steps of a good man are ordered by the Lord: and he delighted in his way. Psalm 37:23 Cleophis Von Dervin Bates, affectionately called Von by his family and Cleo by his friends, made his transition from earth to his heavenly home Friday,... View Obituary & Service Information

The family of Cleophis (Cleo) Bates, Jr. created this Life Tributes page to make it easy to share your memories.

The steps of a good man are ordered by the Lord: and he delighted...

Send flowers to the Bates family.