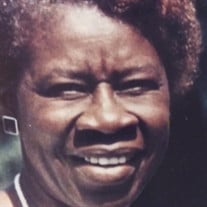 Corina D. Fountain was born on May 17, 1927 to the late Ausil Dingle and Minnie Taylor Dingle in Alcolu, SC. She transitioned peacefully in her sleep into eternal life on October 13, 2018. Corina became a lover of Jesus Christ and at an early age received Him as Lord of her life. She demonstrated her faith in Jesus by joining Westminster Presbyterian Church in Alcolu, SC. When she and her husband James migrated north to Virginia she immediately sought out Front Royal Presbyterian Church to continue her walk of faith in Christ. Supporting her husband in ministry they later transferred to Williams Chapel CME. Corina D. Fountain graduated from Barber Scotia College, receiving her Bachelor’s Degree in Education. After settling in Northern Virginia, Corina become one of the first black educators at Rappahannock Elementary School during the integration of the public-school systems. She served as a teacher in Rappahannock County until 1979. She then transferred her teaching gifts to Warren County Public Schools after earning her Master’s Degree from Shenandoah University. There she taught as a Reading Specialist. Upon retiring in 1991 Corina returned to Sumter, SC. She remained an educator as a Professor at Morris Brown College in Sumter, SC and returned to Emmanuel United Methodist Church with her husband James. She was a member of Zeta Phi Beta Sorority, Inc. Corina spent much of her time serving the Lord and investing time to always help improve the quality of life for others. She committed much of her life to love and care for her family. Patience was one of Corina’s strongest qualities and she demonstrated this daily in her salvation walk with Christ Jesus. Along with her parents she is preceded in death by her husband James Fountain, her brother Woodrow Taylor and her sister Corrine Dingle. Corina D. Fountain will forever be remembered in the hearts of her children: James Edward of San Antonio, TX, Rev. DeAnna (Melvin) Breeden of Acworth, GA.; 4 grandsons Stephan, Matthew (Raven), Kevin and Malik; 6 great grandchildren, Stephan, Jr., Amari, Samiah, Austin, Skiiler and Korina, a dear beloved special daughter JoAnn (Rob) of; three beloved special grandchildren, Meagan, Ashley, and Isaiah all of Stephen City,VA; two beloved Sisters-in-law Rebecca Taylor of Bridgeport, CT. and Willie Mae Thomas, Orangeburg, SC; and a host of nieces, nephews relatives and friends.

Corina D. Fountain was born on May 17, 1927 to the late Ausil Dingle and Minnie Taylor Dingle in Alcolu, SC. She transitioned peacefully in her sleep into eternal life on October 13, 2018. Corina became a lover of Jesus Christ and at an early... View Obituary & Service Information

The family of Corina D. Fountain created this Life Tributes page to make it easy to share your memories.

Send flowers to the Fountain family.