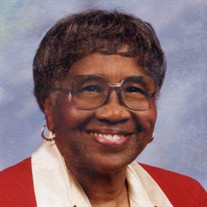 Corrine Adams Smith DECEMBER 20, 1927 – JANUARY 26, 2022 Corrine Lovelle Adams Smith, 94, passed away on January 26, 2022. She was born in Allendale, SC on December 20, 1927 the daughter of the late James Emory Adams and Ruth Gray Adams. Corrine graduated in 1945 from Colleton Training High School in Walterboro, SC before attending Claflin University, in Orangeburg, SC, where she received her Bachelor of Science degree in 1949 with a major in mathematics and minor in chemistry. She went on and received her Master of Art degree in Teaching Mathematics from the University of South Carolina in 1975 and also did additional studies at South Carolina State College and Clemson University. She was a high school mathematics teacher at St. Mark and Tomlinson High Schools in Kingstree, SC for 15 years and Booker T. Washington and Keenan High Schools in Columbia for another 15 years. She was named Teacher of the Year at Keenan High School in 1980. She was a member of the Richland County Education Association, the South Carolina Education Association, the National Education Association and the SC Mathematics Association. Her career as an educator ended with retirement in 1980 from Keenan High School and Richland County School District One after 30 years of service. Corrine joined Red Bank Methodist Church in Colleton County at a very young age and remained a member there until 1952 when she joined Siloam Baptist Church in Kingstree, SC. She became a member of Ladson Presbyterian Church after moving to Columbia in 1965. She was an ordained elder and an ordained deacon and served in many capacities at Ladson Church: choir member, Sunday school teacher, Moderator of the Personnel Committee, Women's Day Committee Chair, Ladson Officers Nominating Committee Chair and Moderator of the Worship Committee. She also served as Commissioner to Trinity Presbytery meetings on many occasions. She was named Mother of the Year at Ladson Church and presented an Honorary Life Membership by Ladson Presbyterian Women in 1993. Corrine was initiated into the Gamma Chi Chapter of Delta Sigma Theta Sorority, Inc. in May of 1948 at Claflin University. She served in several capacities in the Columbia Alumnae Chapter of Delta Sigma Theta Sorority, Inc., was a member of the Girl Scout of the Congaree Area, Inc. where she served on the Girl Scout board for six years and was also a member of Jack and Jill of America, Inc. Her community volunteer service included membership and service positions in the Riverview Terrace Community Organization. She was an avid and fierce bridge player and a member of several bridge clubs. Her hobbies included reading, watching television (game shows, sports and national news), playing bridge, and spending quality time with family, friends, and her beloved dogs. In addition to her parents, Corrine Smith was preceded in death by her husband, George Smith, Sr. and her two brothers, Raymond Adams and Johnnie Lee Adams. She leaves to cherish her memory a daughter, Georgette Smith Fennell (Clarence) of Round Rock, TX, a son, George Smith, Jr. of Atlanta, GA, and a stepdaughter, Linda Smith Gaston of Los Angeles, CA; four devoted grandchildren: Clari Fennell, Gena Pearson, Corri Fennell Lewis (Nelson), and Bayleigh Coren Smith; seven great grandchildren; sister-in-law, Anna Marie Smith of Greenville, SC, sister-in-law, Edith Adams of Walterboro, SC and brother-in-law, Stonewall M. Richburg of Columbia, SC; as well as a host of beloved nieces, nephews and very dear friends. In lieu of flowers donations in memory of Corrine Smith can be made to www.dementiasociety.org or: The Dementia Society of America PO Box 600 Doylestown PA, 18901

The family of Ms. Corrine Smith created this Life Tributes page to make it easy to share your memories.

Send flowers to the Smith family.