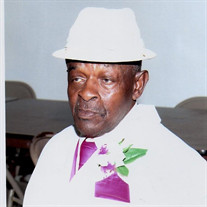 Reflections of a Life Well Spent “For His anger endureth but a moment; in His Favor is Life; weeping may endure for a night, but Joy cometh in the morning.” (Psalm 30:5) We now pause in our final respects to the life well spent on Mr. Daniel Alston. He was a son of the late Mr. Daniel Ervin Alston, Sr., and Mrs. Mary “Pammy” Brown Alston. He was born September 14, 1934 in Sumter County and the husband of the late Ruth Dawson Alston. Mr. Alston departed this earthly life on Friday, December 16, 2016 at the Palmetto Health Richland in Columbia, South Carolina. Daniel attended the public schools of Sumter, County. He was employed by Congaree Construction until his retirement. He was later employed by the Congaree Farm, where he never formally retired. He was a faithful member of Willow Grove A.M.E. Church and served on the Trustee Board, Usher Board, and was “The Father of the Church.” Mr. Alston enjoyed bible study and visiting neighboring churches in the community. In his spare time, he loved fishing, riding his bicycle, and taking care of his family. Daniel was a nurturing person, who loved visiting the sick and helping people any way he could. Daniel took pride in his appearance. He was rarely seen without his hat, shades and his signature fragrance. In spite of his outward appearance, he struggled with depression that made him shy away from people…he became introverted; feeling that the world moves around you and you are not in it. Depression affected his memory, yet when he came out of his depression state, he was a new person remembering everything for the past 14 years, this was his life. But overall, he was crazy about his daughter Renna – even though he loved all his children. Renna never left his side. He leaves to cherish his precious memories: two son Joseph Alston, Sumter and Michael (Ursula) Alston; two daughters, Birnie Jean Brooks and A. Marenna (Walter) Jordan a ll of Dalzell, SC; one sister Martha Anne Pinkney of Sumter, SC; two brothers, Thomas Alston of Chester,Pa. and Charlie (Patricia) Richbow of NJ; brothers-in-law Deacon Isra (Evelyn) Dawson, Dalzell, SC, Ernest Smith, Washington, DC; sisters-in-law: Albertha (Horace) Wade, Beulah Floyd both of Dalzell, Lou Ella Dawson, Phillis Hough, Sumter, SC; Regethel Richbow, Horatio, SC; 15 grandchildren; six great grandchildren; a host of nieces, nephews, other relatives and friends. He also leaves a special lady friend, Ms. Alma Alston of Rembert,SC.

Reflections of a Life Well Spent &#8220;For His anger endureth but a moment; in His Favor is Life; weeping may endure for a night, but Joy cometh in the morning.&#8221; (Psalm 30:5) We now pause in our final respects to the life well spent... View Obituary & Service Information

The family of Daniel E Alston created this Life Tributes page to make it easy to share your memories.

Reflections of a Life Well Spent
“For His anger endureth but...

Send flowers to the Alston family.