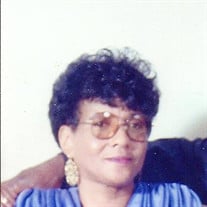 “I have fought the good fight. I have finished my course. I have kept the faith”. Timothy 4:7 OBITUARY It is with great sadness that the family of Mrs. Darnella Kendrick announces her passing in Bishopville, SC on January 16th 2017, at the age of 81. Darnella (Dolly) was born in Winston Salem, NC on May 12, 1936, to Maybelle and Wilbur McKnight. She was the youngest of three children. Her siblings included Wilbert Jr, (Snookie), her oldest brother and Earlene, her older sister. Mrs. Cora Wilson (maternal grandmother) raised Dolly and her siblings after their mother became ill and unable to care for them. Grandmother Wilson was a strict disciplinarian and ensured the trio attended Mt. Olive Baptist Church where each was baptized and also sang in the church choir. Late in their teen years, Grandmother Wilson became ill and eventually passed away. Dolly and her siblings relocated to Harrisburg, PA., where she lived under the supervision of her cousin Mrs. Geneva Proctor. Dolly graduated from William Penn High School in Harrisburg. She continued to pursue educational courses and worked tirelessly and endlessly to find a job that fit her skills, qualifications and personality. Her efforts paid off when she was hired at United Gas Improvement Company (UGI). Dolly worked with engineers and identified or described the physical features of an area of land including natural formations such as mountains, rivers, lakes, valleys - and manmade features such as roads, dams, and cities. She ensured various elevations of an area were recorded using a topographical map. After retirement from UGI, Dolly and her husband James Kendrick, who predeceased Dolly, relocated to Sumter, SC. Although she sincerely missed her family and friends, Dolly acclimated to the area; met new friends and reconnected with some family. She and James became members of name of church, and maintained membership there until their death. Mrs. Kendrick (Dolly) will be lovingly missed by her entire family and extended family whose names are too extensive to mention. That includes nieces, nephews, cousins and any other friends or family member. IN REMEMBRANCE Now that I’ve come to the end of the road and the sun has set for me, I want no tears in a gloom filled room – why cry for a soul set free? Miss me a little – but not too long, and not with your heads bowed low. Remember the love that we once shared, miss me – but let me go. When you are lonely and sick of heart, go to the friends we know, then bury your sorrows in doing good deeds. miss me, but let me go.

&#8220;I have fought the good fight. I have finished my course. I have kept the faith&#8221;. Timothy 4:7 OBITUARY It is with great sadness that the family of Mrs. Darnella Kendrick announces her passing in Bishopville, SC on January 16th... View Obituary & Service Information

The family of Darnella Kendrick created this Life Tributes page to make it easy to share your memories.

“I have fought the good fight. I have finished my course. I have...

Send flowers to the Kendrick family.