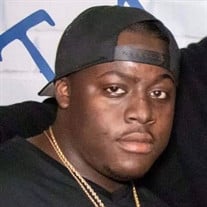 In the early morning hours of Sunday, February 17, 2019, another soul departed this earthly life for its heavenly home. Darold Kevin Dantzler, II, the eldest son of Mr. and Mrs. Darold Kevin Dantzler, Sr., was born June 6, 1997, in Columbia, South Carolina. Darold received Christ at an early age and grew up in Right Direction Church International. Darold received his early education at North Springs Elementary School and Longleaf Middle School before beginning Ridge View High School. Darold transferred to Midlands Middle College, where he graduated in the Class of 2014. During his tenure at Midlands Middle College, he was dual-enrolled at Midlands Technical College while earning varsity letters in swimming and wrestling. Most recently, Darold was completing studies for his Commercial Driver's License to begin a career as a long-haul truck driver. The life of any event, Darold possessed the ability to make you laugh and engage in deep conversation within minutes of meeting. He was entertaining, wise, and skilled with a love of oysters; in fact, he could eat them twenty-four hours a day, seven days a week if possible. Darold was an avid welder and superstar car and motorcycle mechanic. A true entrepreneur and CEO of the burgeoning DD Automotive, Darold prided himself on building a loyal clientele and offered twenty-four hour personal service. If you found yourself with a stalled vehicle at 2 in the morning, one call would have Darold there with tools in hand. His love for cars and motorcycles was not confined to his keen mechanical ability but also flourished into a love for the open road on his motorcycle. He was a recent member of the Wheels of Soul. He leaves to cherish precious memories his parents, Darold and Myra Dantzler of Columbia, South Carolina; two sisters: Courtney Dantzler of Columbia, and Bria Dantzler of Charleston, South Carolina; twin brother Darius Dantzler of Columbia; paternal grandmother Harriet Dantzler of Summerville, South Carolina; maternal grandmother Edna Jenkins of Hollywood, South Carolina; and a host of aunts, uncles, cousins, other relatives and friends.

The family of Darold Kevin Dantzler, II created this Life Tributes page to make it easy to share your memories.

Send flowers to the Dantzler, family.