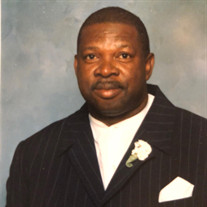 On Monday, December 17, 2018, David Gene Briggs answered the call to leave his earthly dwelling and went to his heavenly home. Born June 3, 1956, in Manning, South Carolina, he was the son of the late Reverend Charlie Aaron Washington Briggs... View Obituary & Service Information

The family of David Gene Briggs created this Life Tributes page to make it easy to share your memories.

Send flowers to the Briggs family.