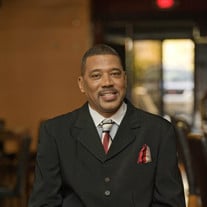 Son, Brother, Husband, Father and Friend “A good name is better than a good ointment and the day of one’s death is better than the day of one’s birth.” Ecclesiastes 7:1 David Green, 56, departed this earthly life on Friday, November 22, 2019 at Prisma Richland Hospital in Columbia, South Carolina. Born in Sumter County on July 2, 1963, David was the youngest of six children born to Willie Lee, Sr. and the late Carrie Gaymon Green. He was educated in the Sumter County Public Schools and graduated from Sumter High School in the Class of 1981. After completing his formal education, David worked in several industries and was later employed as a Team Coordinator with Eaton Electrical Company from 1990 until the present. David was also the co-owner and operator of Serendipity Catering and Events. Although he jokingly referred to his duties there as “everything from Gopher to Maintenance person”, he served and serviced each event in a spirit of excellence and was an invaluable part of the team. David accepted Christ at a young age and showed his love for service as a Steward for St. Peter AME, his childhood church and later as a Trustee and baptized member of St. Mark (4B) Missionary Baptist Church. David enjoyed life’s simple pleasures such as working in his yard, barbecuing on his grill and watching sports. He was often referred to as a gentle giant, his humble demeanor, his smile and his willingness to help others endeared him to many. He was a supportive and loving husband and father who set a high standard for how men should treat women. His children especially remembered him as always being present for them and never differentiating between them. He was easy to talk to, quick-witted and a jokester. He was a storyteller, a teacher, a gentleman who treated all with respect. He was an excellent provider who sacrificed for his family who never wanted for anything. There are numerous testimonies of how he helped others get their lives together to become successful. David was united in Holy Matrimony to Delores Morris on April 22, 2000. From that blended union they each were blessed with bonus daughters. He was preceded in death by his mother, Carrie Gaymon Green (2001), his brother, Aaron “Hank” Green and his father-in-law, John F. Morris. Left to honor and cherish his memory is his loving and devoted wife Delores Green, his daughters, Dasha (Steven) Graves of Fayetteville, NC, Ashley Green of Bronx, NY, Marquita (Devin) Simmons of Columbia, SC, five adored grandchildren, Gavin, Arielle, Aubrey, Ayden, and Alanah, a special grandson, Cayin Simmons of Sumter, SC, his father, Willie Green Sr., his siblings Willie (Juanita) Green Jr., Carrie Jones both of Sumter, SC, Susie (James) Parker Sr., Diane Green both of Bronx, NY, his mother-in-law, Nellie Morris of Sumter, SC, one sister-in-law, Barbara (Joe) Clavon of Dalzell, SC, one brother-in-law, John (Dianne) Morris of Atlanta, GA, and a host of aunts, uncles, nieces, nephews, cousins, and friends.

The family of David Green created this Life Tributes page to make it easy to share your memories.