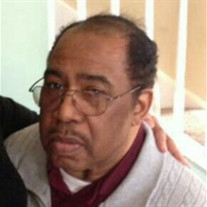 Deacon David Glenn Matthews, Sr. departed this earthly life on Saturday, February 27, 2016 at the Palmetto Health Richland Memorial Hospital. Born on May 19, 1950, in Columbia, South Carolina, he was the son of the late Henrietta Moffitt Matthews and Claude Andrew Glenn. Raised in a Christian home, Deacon Matthews first joined the Trinity Baptist Church where he was a faithful member for over twenty two years. While at Trinity, he served as a Trustee, Member of the Male Choir and the Ushers Ministry. Later, in 1991, he joined Central Baptist Church where he served the Lord in many capacities including: the Nurse’s Ministry, Male Chorus, Usher and Trustee Ministries, assisted with the Transportation Ministry, served as President of the Evangelism Ministry and was a Devotional Leader for the Bible Study. Deacon Matthews was a graduate of C.A. Johnson High School in the Class of 1969. After graduation, he was first employed by South Carolina State Hospital as a nurse. In the late 1980s he worked at Hardaway Concrete. Eventually he was employed by SCANNA/SCE&G as a Bus Driver for eighteen years. Deacon Matthews was a proud member of the Local Teamsters Union #509 for fourteen of those years. In April 2006, he retired from Roadway Express after fourteen years of service. “Deac” as he is known to many was also a member of the Capitol City Lodge #47 of Free and Accepted Masons. While in high school, he met the love of his life, Marian Delores Mitchem. They were united in holy matrimony on June 26, 1970 and to this loving union, two children were born, Tekethia L. and David G. Matthews, Jr. In addition to his parents, he was preceded in death by a brother, Isaac Leroy Portee and a twin of his older sister. He leaves to cherish precious memories, his beloved wife of 45 years, Marian Delores Matthews of the home; his children Tekethia L. (James) Burrell and David G. (Lovisa) Matthews, Jr. all of Columbia; eleven grandchildren: Jessica D. Washington, Jasmine N. Washington, Terri A. Washington, Justin L. Burrell, Marcus C. Burrell, Micalah B. Matthews, David G. Matthews, III, Regan S. Matthews, Madison O. Matthews, Denzel N. Mathews and Brandon E. Mathews ; two great-grandchildren: Zoie A. Scott and Aaliyah R. Scott; six siblings: Haskell Portee, Mary (Joseph) Gilmore, Daya Thompson, Sallie Boykin, Willie Lee (Carrie) McLone and Claude A. “Rick” Matthews and a host of other relatives and friends.

Deacon David Glenn Matthews, Sr. departed this earthly life on Saturday, February 27, 2016 at the Palmetto Health Richland Memorial Hospital. Born on May 19, 1950, in Columbia, South Carolina, he was the son of the late Henrietta Moffitt Matthews... View Obituary & Service Information

The family of Deacon David G. Matthews created this Life Tributes page to make it easy to share your memories.

Send flowers to the Matthews family.