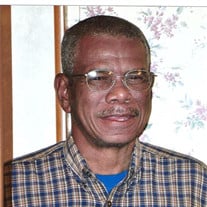 David Emmanuel Oliver, son of the late Emmanuel and Mary Ann Oliver was born December 16, 1946 in Summerton, South Carolina. Knowing the importance of a close connection with God, at an early age, he joined Liberty Hill Historic A.M.E. Church in Summerton, SC. On January 5, 2018 at McLeod Regional Medical Center, God in his infinite wisdom saw fit to call Brother David home from his labor and love to eternal rest. David received his formal education in the public schools of Clarendon and Sumter Counties. He was employed by Carolina Furniture Company of Sumter for a few years before being called to duty to serve his country. In 1970, he was drafted into the United States Army to serve in the Vietnam War, where he received numerous medals, awards and citations to include, a Presidential Citation. After David graduated from Basic Training in California and prior to his deployment to Vietnam, he returned to Sumter to marry the love of his life, Carolyn Williams Oliver. To this loving union, they were blessed with two beautiful children, Davida Latrell and David Jermaine. Upon completion of his tour in Vietnam, he returned to Sumter and continued working at Carolina Furniture Company and Korn Industries for an additional 25 years. He was also a member of the U. S. Army Reserves for 14 years, always willing to protect and serve as his commitment for the love of his country. Finally, he worked for Sumter School District #17 for a number of years until his retirement. If one word could describe David, it would be a “Giver”. David gave of himself without expecting anything in return. He simply had a heart of gold. Over the years we were blessed to have him with us, he became the rock of the family to his siblings, as well as his nieces and nephews. Even though, he was a man of few words, he demonstrated his love through his actions and loved others as God has commanded us to love our neighbors. In addition to his parents, he was preceded in death by his wife, Carolyn Williams Oliver; daughter, Davida L. Oliver; sister, Emma Lawson and brothers, John and ulius Oliver. David is survived by son, David J. Oliver of the home; siblings, Johnny Oliver, Morningside, MD, Margaret O. Battle, Upper Marlboro, MD, Suester (John) Titus, Mardes (Windell) Witherspoon, Marie Oliver, all of Sumter, SC, Darrell Oliver, Centerville, VA and Ruth( Bobby) Holley of Sumter, SC, Sheila (Kevin) McCray, Fredericksburg, VA, Jacqueline Saniford and Todd Oliver, Hartford, CONN ; In-Laws, Alford and Novella Williams, Sumter, SC; best friend, Tommy Wright and a host of nieces, nephews, relatives and friends.

The family of David Emmanuel Oliver created this Life Tributes page to make it easy to share your memories.

Send flowers to the Oliver family.