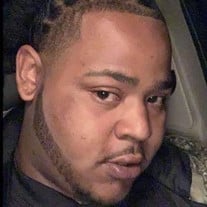 Derrick Da’vontrez Slater entered into eternal rest on Saturday, October 26, 2019 in Rembert, South Carolina. Born on March 15, 1996, in Camden, South Carolina, he was the oldest of three children born to Shandel Porter and Horace Wade, Jr. Derrick was a graduate of Crestwood High School in the Class of 2014. He was a member of the Union Baptist Church basketball team, in Rembert. After high school, Derrick moved to Norfolk, Virginia and continued his education at ATI Welding School. He later returned to the Rembert community and was employed at McDonald’s in Camden for over five years and recently was promoted to a manager. In his leisure time, he loved music and wanted to be a writer, a rapper and a promoter. Derrick was also, an avid sports fan of football. He especially liked the Pittsburg Steelers and loved to laugh and just enjoyed hanging around with his family. Just recently in August, he had the opportunity to host a Reveal Party, and was so excited about the upcoming birth of his first child. Derrick’s presence and laughter will sincerely be missed by all his family and friends, but his memory will live on forever. Derrick was preceded in death by his grandfather, Leroy Porter and uncle, Leroy Porter, Jr. Those left to cherish his precious memories are: his loving mother, Shandel Porter; his maternal siblings: Mornajua Slater, Euvasia Hickman, all of Rembert, SC, Jake McCray and Jermany McCray both of Camden, SC; his paternal siblings: Shemikia (Alphonso) Wall, Krystle Wade, Travis Wade, Sherman Council, Hawatha Wade all of Rembert; grandmother, Lesia (Ulysses) Green Harrison of Winnsboro, SC; two uncles, Harry McLeod and Anthony Porter of Rembert, SC ; a special aunt Betty “Peaches” McLeod, Rembert, SC; the mother to-be of his child, Seirra Blanding ; a special god-daughter, Janiyla McLeod; a best friend, Tyderick Thompson and a host of nieces, nephews, other relatives and dear friends.

The family of Derrick Da'vontrez Slater created this Life Tributes page to make it easy to share your memories.

Send flowers to the Slater family.