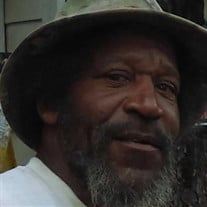 Palmer Memorial Chapel - Columbia is inviting you to a scheduled Zoom meeting. Topic: DeWitt Talmadge Robinson III Time: Nov 13, 2021 02:00 PM Eastern Time (US and Canada) Join Zoom Meeting https://us02web.zoom.us/j/85008571136?pwd=NW9MTDY1amdyUzFaV0lBRWN4UHY3Zz09 Meeting ID: 850 0857 1136 Passcode: B800Zr DeWitt Talmadge Robinson III, affectionately known as “Tal” and “Skull”, transitioned on Tuesday, September 14, 2021 in Columbia, South Carolina. Born in Columbia on September 29, 1961, he was a son of the late DeWitt Talmadge Robinson Jr. and Eunice Primus Robinson. He attended St. Martin de Porres Catholic Elementary School, graduated from Keenan High School and Midlands Technical College. He was a faithful member of the family church, St. Luke’s Episcopal Church, where he served as an altar boy early in life. Tal, as he was known by his family and affectionately known to others as “Skull”, was very shy but an extraordinarily strong and talented baseball player growing up who always had a natural affinity for the outdoors. He loved to fish and hunt, much like his dad. He loved riding his Harley Davidson motorcycle and his furry babies, his dogs. He also enjoyed his music: whether it was R & B, such as Michael Jackson, Rock N’ Roll bands like, Lynyrd Skynyrd, or proudly showing his admiration for his nephews’ (Donald & Darren) rap music. Tal was a gifted mechanic as well. He could repair or maintain any vehicle brought to his auto mechanic shop known as “SKULLS”. A devout motorcycle rider, known in many circles, Tal was well regarded in various biker clubs and organizations, and even led his own biker club “Skull Duggery”. His reputation preceded itself, and he was much honored and loved by his many friends, comrades and close brothers over the years. Not only was Tal handsome, but he was loved by many for his beautiful smile, great giving spirit, quiet demeanor, yet he had the propensity to be rowdy and fun-loving. He was a “true warrior”, a man of honor and respect, who lived out Matthew 10:26, “fear no man, but God”. Tal chose a courageous outlaw lifestyle, coupled with a rebel mentality, which he sometimes wore on his chest, vest (or sometimes around his knee, literally). Having the impetuous ability to make anyone he loved or cared for, feel protected and smile at the same time. Tal garnered a reputation around town, making him quite the “local celebrity”. Unfortunately, a year ago, Tal was rendered incapable of living the life he chose as a result of a pedestrian auto accident where he suffered traumatic brain injury and was given very little chance of survival. Through GOD’s Amazing Grace, he survived mentally aware and responsive as best he could. GOD, also, blessed Tal with incredible inner and outer strength to endure the harshest situations and conditions life could bring and yet he persevered. Tal was survived by his loving wife, Debra and his step-daughter Bonnie, his ever-loving sister, Janice Robinson (Donald) Murphy, his devoted brother, Glenn Primus Robinson, Sr.; his aunts, Reverend Bernice Primus Crumlin, Mrs. Juanita Robinson Adams, Mrs. Carol Robinson Flemming and Mrs. Mollye Alford Robinson. Throughout his life, Tal maintained a special relationship with his first cousin Wallace Crumlin, III. We will always be grateful for Wallace, his compassion for Tal, constantly being there for him, through thick and thin, no matter what the situation called for. He was also survived by his nieces, Robin J. Murphy, Chelsea Robinson and Camryn Robinson.; nephews, Donald Murphy, II, Darren Murphy, and Glenn Robinson, Jr.; a host of tenacious cousins and friends who had major influences in his life and all of whom he loved dearly. Thank You, FATHER, for all Your love and mercy on Tal’s life. We are better as a result of Your gift of his life which You allowed us to experience. Thank all of you for loving “Tal”, “Skull”.

The family of Mr. DeWitt Talmadge Robinson III created this Life Tributes page to make it easy to share your memories.

Palmer Memorial Chapel - Columbia is inviting you to a scheduled...