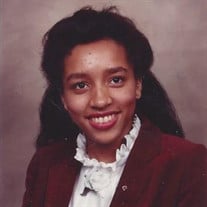 In the early evening hours of Monday, December 24, 2018, the Lord reached down to take the hand of Doretha Marsha Wright to take her home. Born August 5, 1965, in Blythewood, South Carolina, Doretha was one of twelve children born to the late Ezell and Lizzie Addison Wright. Educated in Richland County public schools, she was a graduate of Spring Valley High School in the Class of 1983 where she was a member of the Health Occupations Students of America (HOSA) and received numerous awards and accolades for her service. She furthered her education at the Baptist Hospital School of Nursing and Midlands Technical College. After becoming a certified phlebotomist in 1987, Doretha began her career at WJ Bryan Dorn Veterans Affairs Medical Center where she remained employed until her untimely passing. She enjoyed her work and especially her patients, whom she called "my veterans;" additionally, Doretha was employed for over twenty years at the Richland County Public Library. Baptized at an early age and accepting Jesus Christ as her personal savior, Doretha traversed her faith journey at Bethel Baptist Church where she and her sisters sang with the JH Bolar Singers, and Usher Board Ministry organziation. Doretha also enjoyed traveling, attending concerts, reading, drawing, and spending self-reflective time. In addition to her parents, she was preceded in death by a brother, Ezell Wright, III. She leaves to cherish precious memories nine sisters: Zelma Wright of Decatur, Georgia, Ellen Wright, Josie (LC) Lane, Annsaline Wright, Gladys (Craig) Mayo, Elizabeth Wright, Pandora Outen, all of Columbia, Viola Cooke, and Gussie Cornelius, both of Blythewood; one brother, Wesley (Patricia) Wright of Columbia; a special aunt raised in the home like a sister, Gladys Addison, of Columbia; and a host of other relatives and friends who will miss her dearly.

In the early evening hours of Monday, December 24, 2018, the Lord reached down to take the hand of Doretha Marsha Wright to take her home. Born August 5, 1965, in Blythewood, South Carolina, Doretha was one of twelve children born to the late... View Obituary & Service Information

The family of Doretha Marsha Wright created this Life Tributes page to make it easy to share your memories.

Send flowers to the Wright family.