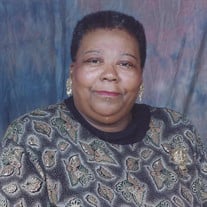 Doris Elizabeth Taylor was born on December 10, 1942, in Jenkinsville (Fairfield County), South Carolina. She was the second oldest child born to Lonnie Taylor and Annie Mae Harts Taylor. Doris and her sister Bernice were reared in the home of their maternal grandparents, the late Robert "Ross" Harts, Sr., and Hattie Friday Harts, where they lived a happy and healthy childhood until it was time for them to spread their wings and go out into the world of professionalism. Doris entered into eternal rest on Friday, February 26, 2021, in her home surrounded by her loving family. Doris was educated in the public schools of Fairfield County and graduated from McCrorey Liston High School in 1960. She later attended Midlands Technical College studying Accounting. "Dot" as she was affectionately called by her family and cousins, was always the jokester of the family. She was always the spokesperson that kept everyone around her laughing. Then she would get real deep making her cousins believe and appreciate her words of wisdom. Her family later realized that Dot did, in fact, have a great deal of knowledge and wisdom. She would often sit and write poems during her spare time. The poem that is dedicated to her by her son is a poem that Doris wrote in honor of her mother. Doris loved the Lord and joined Mount Moriah Baptist Church in Jenkinsville, South Carolina, at an early age. She later became a Jehovah's Witness and attended the Forest Drive congregation in Columbia, South Carolina, faithfully. Doris began her professional preparation and employment history by working at the old Columbia Hospital on Harden Street in Columbia as a Certified Nursing Assistant. Later she was employed by South Carolina National Bank in the Accounting Department. After several years, Doris went to work for the Governor's Office in the CETA Division. Doris was married to the love of her life, Wilbert Joseph Jordan, and this union was blessed with a daughter, Darlene Elizabeth Jordan, and a son, Wilbert Bernard Jordan. Her children were always right there in her heart next to Jehovah God. She was preceded in death by her parents: Lonnie Taylor and Annie Mae Harts Taylor; her grandparents: Robert "Ross" Harts and Hattie Friday Harts; her daughter Darlene Elizabeth Jordan; and a brother Orsby Herndon. Doris leaves to cherish many wonderful memories her son Wilbert Bernard Jordan; her sister Bernice (Robert) Bailey; a brother Woodrow Herndon, Jr.; an uncle James Harts; a sister-in-law: Gladys Herndon; and a host of nieces, nephews, cousins, other relatives and caring friends all of whom will miss her dearly. To attend the services via Zoom use the information below: https://jworg.zoom.us/j/84693473443?pwd=c3VDVnU3R1VSWWdFOUVweGNFeUVSZz09 zoom.us Meeting ID: 846 9347 3443 Passcode: 107581 One tap mobile +16465588656,,84693473443#,,,,*107581# US (New York) +13017158592,,84693473443#,,,,*107581# US (Washington, DC) Dial by your location; +1 646 558 8656 US (New York) +1 301 715 8592 US (Washington, DC) Meeting ID: 846 9347 3443 Passcode: 107581

Doris Elizabeth Taylor was born on December 10, 1942, in Jenkinsville (Fairfield County), South Carolina. She was the second oldest child born to Lonnie Taylor and Annie Mae Harts Taylor. Doris and her sister Bernice were reared in the home... View Obituary & Service Information

The family of Doris Elizabeth Taylor created this Life Tributes page to make it easy to share your memories.

Doris Elizabeth Taylor was born on December 10, 1942, in Jenkinsville...

Send flowers to the Taylor family.