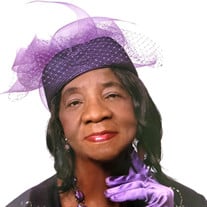 Mrs. Doris P. Waddell passed away peacefully at home on Wednesday, January 5th, 2022 in Columbia, South Carolina. A native of Columbia, she was the daughter of the late Mr. John Wesley Plunkett and Annie Greene Nelson. She received her early education at Waverly Elementary School and Booker T. Washington High School (Columbia). She earned the Bachelor of Science degree in Elementary Education from her beloved Allen University. Mrs. Waddell also earned a Master of Education degree from the University of South Carolina. Mrs. Waddell enjoyed a fifty-three (53)-year career in Education. Throughout her career, she was totally committed to the success of the administrators, teachers, students and parents. This commitment, as she described it, was simply “a way of life”. Mrs. Waddell continued to seek additional education opportunities throughout her career so that she would be able to meet the needs of her students. She firmly believed that “students had the right to ask questions and that teachers are obligated to provide the answer or lead them to the sources where the answers could be located. ”Then…”, she surmised, “... it would become a student’s responsibility to seek and find the appropriate solution”. Mrs. Waddell began her teaching career in Bennettsville, South Carolina. She taught at the Marlboro County Training and High School, Bennettsville Middle School and Bennettsville Elementary School. Mrs. Waddell also taught Adult Education and was the first teacher within the Marlboro County District to receive HEAD START training from the University of South Carolina to prepare five-year olds to enter school. As a result of her teaching successes, Superintendent E.B. Carnes selected Mrs. Waddell as lead teacher in a then new type of school intentionally focused around small group settings, a strong curriculum and excellent materials. There were many successes during her tenure with this Marlboro County program. Ms. Waddell also taught at Lady’s Island Elementary (Beaufort, South Carolina) and Hand Middle School. She retired in 2009 from V.V. Reid Elementary School (Columbia, South Carolina, but continued to substitute teach because she stated that the word “retire” had little meaning in her life.”. Ms. Waddell was active in educational organizations. She is a retired Life Member of the National Education Association (NEA), the South Carolina Education Association (SCEA) and the Richland County Education Association (RCEA). She also served in a variety of key leadership roles throughout her career. These include: Treasurer, Marlboro County Education Association, Publicity Chairperson and Secretary of the A.C. Flora High School Parent-Teacher (PTO) organization, African-American History Chairperson and Secretary of the Hand Middle School Parent-Teacher Organization and Chairperson of Educational Activities at V.V. Reid Elementary school. A strong christian commitment was the cornerstone of Mrs. Waddell’s life. She believed in God, the church and in serving others. She acted as Chairperson of the Council of Ministries at Wesley United Methodist Church (UMC) in Beaufort, South Carolina and Bluff Road (UMC) in Columbia, South Carolina. She also held office at the District level serving as Chair of Youth, Family and Adult Ministries. In addition, Mrs. Waddell took great pride in serving as a Certified United Methodist Lay Speaker for over twenty-five years. This, she shared, was the true “highlight of her life”. She was also very active in each local congregation she attended. For example, she served as pianist at Bluff Road United Methodist Church (Columbia, South Carolina) and Sunday School Teacher at St. Michael’s United Methodist Church in Bennettsville, South Carolina. Ms. Waddell was a faithful member of Frances Burns United Methodist Church. She took great pride in delivering the weekly Children’s Sermon for fourteen years and in serving as Coordinator for Children’s Sermons. Her favorite Motto was, “To God Be the Glory for the Great Things He Has Done”. Mrs. Waddell was a Renaissance woman who enjoyed writing poetry, short stories and plays. She was also a singer, pianist, and amateur movie and commercial actress. She was also active in her community as a member of Alpha Kappa Alpha Sorority and the Eastern Stars. In addition to her parents, she was preceded in death by her husband, Dr. Maurice Waddell, Sr and son Maurice “Butch” Waddell, Jr. She was married to the late Dr. Maurice Waddell Sr. (deceased), and is the mother of five children: Maurice (Butch) Waddell Jr.(deceased) (Gwen Waddell), Dr. Doris Waddell Gilliam, Dr. John K. Waddell (Sharon Bolton Waddell) who became President of Allen University, Marcia C. Waddell and Douglas K. Waddell (Carolyn Cohen Waddell). She was the proud grandmother to Tevin, Jerrell, Maurice III, Douglas Jr.,Cierra, Alexandria, William, Lauren and Meaghan Waddell. She was also a great-grandmother and she shared long and close relationships with her five siblings and numerous cousins. Mrs. Doris P. Waddell is a shining example of 90 years of a life well-lived. She leaves a legacy of love as an exemplary wife, mother, grandmother, educator and community member. Her intelligence, generosity of spirit and loving-kindness will be sorely missed, but fondly remembered.

Mrs. Doris P. Waddell passed away peacefully at home on Wednesday, January 5th, 2022 in Columbia, South Carolina. A native of Columbia, she was the daughter of the late Mr. John Wesley Plunkett and Annie Greene Nelson. She received her early... View Obituary & Service Information

The family of Mrs. Doris Alice Waddell created this Life Tributes page to make it easy to share your memories.

Send flowers to the Waddell family.