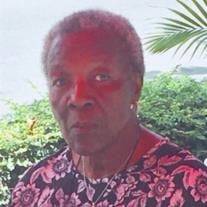 As she knelt on her knees in prayer, Dorothy Ann Jones-Grooms embraced that inevitable hour of peace that comes to everyone on the morning of August 12, 2018. Born in the Alcolu community of Clarendon County on July 31, 1941, she was the daughter of the late Mr. Edward and Mrs. Sarah Jane Frierson Jones. As a young lady she was educated in the public school system of Clarendon County and was a graduate of Eastern High School. Faith in God was important to Dorothy and she accepted the Lord Jesus Christ at an early age at the Westminster Presbyterian Church. Following the path set by many of her siblings, she relocated to New York City after graduation to find her road in life. The education that resulted presented itself as alternate times of triumph and defeat, joy and sorrow, but she persevered. She was no pushover, as from time to time she “roared” like the lion representing her zodiac sign. She had a quick wit and enjoyed playing cards and board games that challenged her intellect. Her generosity of spirit and devotion to service displayed itself early in her life as she enlisted in the United States Army Reserve and was educated, trained, and served as a Medical Specialist - First Aid Attendant, where she also received an Expert Markmanship Badge for the Rifle M-16 before her honorable discharge in 1976. She relocated to Columbia, SC where she met and married the late Willie Lee Grooms in August, 1989, and became a member of Northminster Presbyterian Church. There she served as an Usher for that faith community. Despite her struggles, Dorothy found joy in her faith, her family and the care of her patients in her work as a Nursing Assistant at several Columbia area hospitals and in private duty. In the remaining years before her death, she was blessed to live with her son in New York and later her daughter in Lithonia, GA, as they assisted and supported her through her health challenges. Continuing her legacy of love and service, remembering her life, and mourning her passing are her daughter, Sherrill Theressa Jones-Rucker (Alvin) of Lithonia, GA, her son, The Rev. Dr. Greg B. Jones of New York, NY; grandsons Malcolm D. Jones, Marcus D. Jones, and Everett Rucker. Left to represent the circle of eight siblings are her brother, James E. Jones (Dorothy) of Dallas, GA, Flossie Jones Delaney of Lithonia, GA, Eva L. Jones Thomas of Columbia, SC, Samuel H. Jones (Debra) of Eastover, SC, Virginia Jones Washington of Eastover, and Saul E. Jones (Gwendolyn) of Ft. Washington, MD. From two siblings who preceded her in death, she is loved by a sister-in law, Reather Hemingway Jones (Thomas) and James Henry (Louvenia). All of her nieces and nephews were precious to her and they will treasure her memory and miss her warm heart and hugs. Other relatives, and friends far and near will remember her with smiles and laughter for the ways she touched their lives.

As she knelt on her knees in prayer, Dorothy Ann Jones-Grooms embraced that inevitable hour of peace that comes to everyone on the morning of August 12, 2018. Born in the Alcolu community of Clarendon County on July 31, 1941, she was the daughter... View Obituary & Service Information

The family of Dorothy Ann Jones-Grooms created this Life Tributes page to make it easy to share your memories.

As she knelt on her knees in prayer, Dorothy Ann Jones-Grooms...

Send flowers to the Jones-Grooms family.