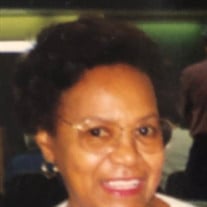 Dorothy Mae (Bethune) Ladson, beloved wife, mother, grandmother, mother-in-law, sister, friend, and one of the most loving and caring persons, died on Wednesday, August 19, 2020, at her home in Sumter, after a long fight with Progressive Supranuclear Palsy, a neurological disease. Dorothy, affectionately known as “Dot or Dottie” to family and friends, was born on May 22, 1939, in Silver, South Carolina. She was the fourth of six children born to the late Thelmer and Mattie Johnson Bethune. Dorothy was raised in both the Paxville and Sumter, South Carolina communities. Her father was instrumental in the Desegration Movement of Clarendon County (Briggs vs Elliott) which led to the Brown vs Board of Education Supreme Court decision. Dorothy was very proud of her family’s history in the Civil Rights movement. During her childhood she enjoyed spending time on her father’s farm, listening to music and spending time with her family and friends. She also had a fondness and a soft spot in her heart for animals, which she passed on to her son and grandchildren. Dorothy was a graduate of Lincoln High School Class of 1957, where she was an outstanding student and a member of several of the school’s organizations. During her early childhood Dorothy accepted Christ as her Lord and Savior while attending Jehovah Missionary Baptist Church in Sumter. During her high school years, Dorothy would spend the summers in New York City where she lived with her older sister and worked at Mays Department Store. Dorothy always put others first and this was seen at an early age, when at the end of each summer in New York City she would buy school clothes and supplies for her younger siblings in Sumter. After graduating from high school she moved to New York and worked at Mays Department Store full time. It was there in New York City, where she met her future husband, Frank Ladson (also a Sumter native) who was in the Navy assigned to recruiting duty. Dorothy and Frank were married on September 27,1960 and a year later she gave birth to a son, Franklin D. Ladson, on August 7,1961. She enjoyed her life as a military spouse. First living in San Diego, California while her husband was stationed in Okinawa, Japan, for 18 months, then Sasebo, Japan, another stop in San Diego, California, then to Quantico Marine Corp Base, Virginia (living in Woodbridge, Virginia), followed by Subic Bay Navy Base, Philippines, then back to the Washington DC area, followed by Rota Naval Base, Rota, Spain, and then finishing her traveling life as a military spouse at Beaufort Naval Hospital, Beaufort, South Carolina. Dorothy’s love for adventure and travel made her a great military spouse and a tremendously supportive partner to her husband as he advanced in the Navy. After their military career ended in 1985, she and Frank moved to Paxville, South Carolina. She enjoyed gardening, fishing, spending time with her family and friends, and hosting out of town guests at her home. She also enjoyed traveling with her husband Frank to visit their son and his wife at various Air Force Bases (Nevada, Italy, Colorado Springs, South Dakota, and Tampa). Dorothy was blessed to have a grandson and granddaughter, and she loved spoiling them and showering them with her love. Dorothy was also a long time devoted member and Usher at Friendship AME Church in Summerton, South Carolina. During her adult life Dorothy was employed by various other organizations which included: The Navy Exchange System, The Federal Bureau of Investigation, The Virginia Federal Correction System, and Clarendon School District Two. In addition to parents, she was preceded in death by two siblings: Adrian Bethune Anderson and Walter Bethune. She leaves to cherish precious memories her devoted husband, Frank, of over 59 years; her son, Franklin Delano Ladson and his wife Sue of Sumter; two grandchildren, Joshua Robert Ladson of Cape May, New Jersey, and Julia Danielle Ladson, of Clemson, South Carolina; five siblings: John Henry (Brenda) Bethune, Willean Gray, Selena Bethune, Cleo (Brenda) Bethune, and Cynthia Bethune of Sumter; and a host of nieces, nephews, cousins, other relatives and friends. To attend the graveside service virtually, please log onto https://us04web.zoom.us. The meeting code is: 217 032 2535. Password:a1BEQnhmU3hYQzZITnJSNnBqcHkyUT09 In lieu of flowers, donations may be made to either: CurePSP at 1216 Broadway, 2nd Floor, New York, NY 10001 or online at psp.org/iwanttohelp/ways-to-give/ .

Dorothy Mae (Bethune) Ladson, beloved wife, mother, grandmother, mother-in-law, sister, friend, and one of the most loving and caring persons, died on Wednesday, August 19, 2020, at her home in Sumter, after a long fight with Progressive Supranuclear... View Obituary & Service Information

The family of Dorothy Mae Bethune Ladson created this Life Tributes page to make it easy to share your memories.

Send flowers to the Ladson family.